GET A VERY TRAINOR CHRISTMAS HERE!

“The winner of the best Christmas album of 2020 is clearly Meghan Trainor.” 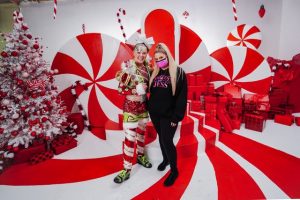 (December 10, 2020 – Los Angeles, CA) – With Christmas a little more than two weeks away, Meghan Trainor unveils a new high energy music video for her original holiday song “I Believe In Santa” starring none other than her friend, mega star JoJo Siwa. Watch it HERE.

Powered by show-stopping vocal runs and sweet seasonal swagger, the video seamlessly translates the song’s magic on-screen. After stumbling upon Santa’s house, Siwa electrifies every room she encounters with her unstoppable choreography. She dunks herself in marshmallows and hot cocoa, rocks shiny elf threads, and even inspires Santa J Claus (our favorite TikTok Santa) to bust out his breakdancing skills. Siwa perfectly performs Trainor’s lyrics, “I believe in Santa, not just in December, baby!”

“JoJo is a superstar!,” said Meghan. “She works so hard and her incredible, positive energy is contagious. It was an honor to have her star in this music video!”

“I have always admired Meghan as a singer, songwriter, entertainer! I am so happy and honored to star in her video,” said JoJo. “I can’t wait for the world to see it!”

One of many gifts under the tree, “White Christmas” just soared to #1 on the AC chart, while holding #1 on the mediabase Holiday Chart for the fourth consecutive week. Plus, Meghan continues her television takeover. She hit the stage at NBC’s TODAY Show for the Rockefeller Tree Lighting. Last night, she lit up The Tonight Show Starring Jimmy Fallon, performing “Holidays” joined by Earth, Wind & Fire. Maintaining this momentum, she will be performing on The Kelly Clarkson Show and The Late Late Show with James Corden next week.

A Very Trainor Christmas is packed with all your favorite Holiday classics along with a total of six new original songs, including the previously released “I’ll Be Home” and “My Kind of Present.” “Holidays” [feat. Earth, Wind & Fire] dangles mistletoe from the disco ball as funky horns and a wild beat resound through Christmas Eve and into the morning. “Christmas Party” brings the entire family together, while “Christmas Got Me Blue” gets the lonely hearts dancing.

Of course, it wouldn’t be the holidays without friends and family. Seth MacFarlane joins Meghan for a soulful and sweet rendition of “White Christmas,” while Meghan’s cousins, Jayden, Jenna, & Marcus Toney take flight with “Rudolph The Red-Nosed Reindeer.” Marking the most sentimental moment of all, dad Gary Trainor guests on a joyous “Have Yourself A Merry Little Christmas.”