“checks all of the genre’s best boxes” 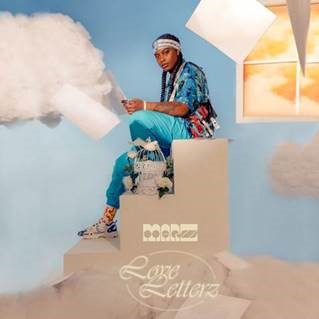 The six-track project is an enthralling debut that combines classic elements of R&B and gospel. Written across multi-colored notebooks that help Marzz process her synesthesia—or, the ability to see color in music—’Love Letterz’ is a diary of her emotions, which she says represents “loving yourself and staying positive through everything.”

“‘Love Letterz’ is a very honest part of myself, so I’m both nervous and excited to present it to the world,” says Marzz. “There was a lot that I experienced and put into this project, and it means a lot to me that I can share these moments with anyone who can relate.”

“I wrote all of these songs in my room at my dad’s house,” Marzz says of ‘Love Letterz.’ “I would just put my feelings down in one of my colored notebooks and do voice recordings on an app called BandLab before I could get studio time and record them. I really hope that everyone loves it and continues to be on this journey with me. It’s been a crazy ride so far and I’m truly blessed and appreciative.”

Alongside the release of ‘Love Letterz,’ Marzz’s new music video for her emotion-filled ballad “Countless Times,” is out today. In the Day Day-directed video, Marzz plummets through different cinematographic visuals, finding herself trapped in the same monotonous relationship before she finally reaches the end of the descent—alone but free.

Marzz has a central focus for listeners: for them to enter tomorrow’s world through her mind. Drawing inspiration from the planet Mars’ fiery-red intensity, the rising R&B singer/songwriter (who hails from Louisville, KY), hopes to teach others to embrace their uniqueness. Born Laria McCormick, Marzz grew up in the church as many of her family members — including her mother and grandmother — were ministers. She began singing in the children’s choir at age 4 but quickly realized that she didn’t like all the attention. Marzz’ shyness, paired with suppressing her sexuality under the pressures of the church, initially forced her to hide inside her own bubble.

The singer soon found solace through a mixture of secular and gospel artists, including Beyoncé, Lauryn Hill, Mariah Carey, Erykah Badu, Kirk Franklin, Kim Burrell, and the Clark Sisters. At first, Marzz considered pleasing her mother by going to bible college to learn how to become a pastor. But she knew her passion lies within secular music. So, after coming out in high school and having fellow students cheer on her talents during pep rallies, she built the confidence to take being an R&B artist as a serious career. Marzz transformed the words she scribbled in various notebooks (she currently has 29 of them) into R&B freestyles, which she then uploaded on Instagram. Along with the freestyles, she began to upload covers of popular R&B artists including Teyana Taylor and Ella Mai. Then in late 2019, Marzz’s talent caught the attention of none other than one of modern music’s pioneers: Timbaland. The legendary producer reached out to Marzz to record a handful of tracks and shared her talents on his Instagram page, not only boosting her growing fan base but changing her life. As fans continue to discover Marzz, she hopes her music will fuel their imagination to create their own narratives — almost like a magic spell.

MARZZ ON THE WEB