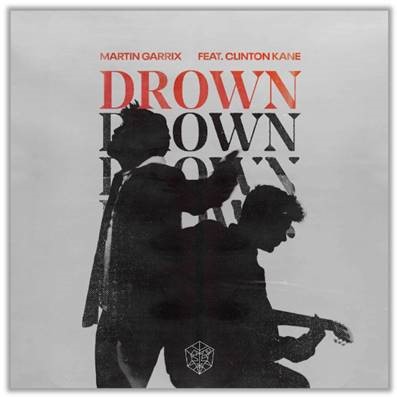 Martin  Garrix is back with a long awaited new single, this time collaborating with rising singer Clinton Kane. Martin is never one to sit still and has been releasing one track after the other, now kicking of 2020 with the beautiful sound of “Drown”.

Kane’s powerful vocals gather weight and is the perfect fit for the characteristic Garrix style. By combining forces, they have managed to establish a very powerful sound which will win hearts and minds the world over and is yet another shining example of his natural talent for working with brilliant vocalists from all over the world.

Born to Norwegian and Filipino parents and living in between multiple countries—primarily the UK and Australia, Kane grew up teaching himself to sing, play guitar, piano and the drums. Signed to Columbia, this huge talent makes for a great match for Garrix, and the pair got on like old friends when they collaborated on this track.

Martin Garrix: “Making this track with my friend Clinton Kane was amazing! He is crazy talented and we get along very well making the studio sessions loads of fun! I’m really happy with the end result.”

Clinton Kane: “Martin is such a warm human and a mad talent. It was heaps of fun writing and working with him on this track. We actually only met after the song was fully finished due to logistical issues and volcanic eruptions. Thank god for technology! Love him to death.”

With Garrix’s recent exploits including a life-changing trip to Antarctica and working on UEFA EURO 2020, his 2020 is just getting started and this new track will blast it into overdrive!

Martin Garrix has risen to global stardom in both pop as well as electronic circles. Dance music’s freshest talent has headlined festivals around the globe, founded a label and mentored other artists and won the #1 spot in DJ Mag’s Top 100 three times. His passion, ambition, drive and maturity remain unmatched in the world. “Animals” released June, 2013 was a breakout success and a game changer for the music industry. Reaching No.1 in the UK and many other territories, it proved that a hard-hitting dancefloor-oriented track could reach pop status, ultimately reaching over a billion streams across several platforms. The seven years since have been marked by a quick march through the ranks of dance music, conquering stages all around the world and releasing more breakout hits including the highly acclaimed “Scared To Be Lonely “with Dua Lipa, “There For You ’ ”with Troye Sivan, “Ocean “ with Khalid, “Summer Days’ ‘with Macklemore and Patrick Stump of Fall Out Boy, “Home” and “High On Life” with Bonn, and “Used To Love “with Dean Lewis”. He was awarded with two MTV EMAs, a ‘Man of Today’ accolade from British GQ, a spot among Forbes’ ‘30 Under 30’ list twice, Billboard’s “21 Under 21” list three times, and has also been honored on Billboard’s ‘EDM Power Players’. Garrix performed at the 2018 Closing Ceremony of the Winter Olympics in Pyeong Chang, South Korea in 2018, The Tonight Show Starring Jimmy Fallon twice and Good Morning America’s GMA Day. Set to produce and perform the official song of UEFA EURO 2020, the anthem will be revealed in spring 2020 to celebrate the 60 years of the competition. Martin started working with the brand AXE in 2018 with the release of Burn Out, to launch their platform AXE music. With STMPD RCRD Snow firmly established, he has free range to do exactly what he loves most: making music.

Born to Norwegian and Filipino parents, 20-year-old Clinton Kane has lived in multiple countries, spending much of his time primarily between Australia and the UK. Clinton taught himself how to sing, play guitar, piano, and drums with his musical influences initially drawn from the church he grew up attending. Over the  past  15  months,  Clinton  has  shared  20  original  songs, which generated a lot of buzz  from fans and A&Rs alike. Since signing to Columbia in April 2019, he released his debut EP this is what it feels like, chronicling the most vulnerable moments he’s experienced thus far: heartbreak, infidelity, anxiety, and more. Clinton released his latest song “So I Don’t Let Me Down “in December 2019, which was inspired by his life as an artist and details his personal struggles. While his songs have become his own form of self-care, Clinton hopes that they have the same effect for someone else