Video will be Showcased at The Game Awards, where MARVEL SNAP is Nominated for Best Mobile Game 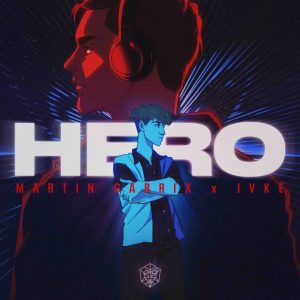 In collaboration with Nuverse, Second Dinner and MARVEL Entertainment, today superstar DJ/Producer, Martin Garrix, and multi-talented viral singer, songwriter, and producer JVKE released their new MARVEL SNAP anthem track ‘Hero’, supported by a superhero-studded animated music video. In this mind-melding adventure video, inspired by the hit game, MARVEL SNAP, epic Marvel love stories are used to explore the trials and tribulations of falling in and out of love.

In the video, JVKE falls deep into thought and imaginative exploration when he gets an all too familiar “Can we talk?” text from his ex-girlfriend, Georgia. Throughout the video, JVKE explores the highs and lows of a relationship through fan favorite Marvel pairs including Spider-Man & Mary Jane, Storm & Black Panther, and Vision & Scarlet Witch.

‘Hero’ explores a new side of the ever-diverse Garrix, with a mysterious, ominous, pumping sound where JVKE’s vocals perfectly blend in. The song already raised anticipation around the world when Garrix announced its release a couple of weeks ago.

Martin Garrix: ‘’I’m super honored to be a part of this project. I love exploring new territories with my music, and I’m really excited the song is finally out today.’’

The immersive music video was crafted by the award-winning London-based animation studio, The Line Animation. The video will be shown at tonight’s The Game Awards,where MARVEL SNAP is nominated for the Best Mobile Game award. MARVEL SNAPlaunched in October to critical acclaim, and quickly became one of the year’s top downloaded and highest rated games in the world.

Martin Garrix – the name that belongs to one of the youngest and most successful DJ’s/producers championing the pop and electronic scene. Garrix has taken his expertise across the globe, by headlining festivals, breaking through territories, and collaborating with major stars.

Garrix has become responsible for providing us with infectious and anthemic dance and pop records through the 2010’s alongside a string of memorable collaborations from ‘In The Name Of Love’ featuring Bebe Rexha, ‘Scared To Be Lonely’ featuring Dua Lipa, ‘There For You’ featuring Troye Sivan, ‘Ocean’ featuring Khalid and last but certainly not least ‘Summer Days’ with Macklemore and Patrick Stump of Fall Out Boy.

His musicians ear for electronic-infused backdrops has allowed him to impact the world with his infectious productions, both digitally – accumulating a notable 25 million monthly listeners on Spotify alone – through monumental, once-in-a-lifetime performances such as the Winter Olympics 2018, Coachella, Lollapalooza, Ultra Music Festival, Tomorrowland (to name a couple) and eventually announcing to be the Official UEFA Euro 2020 music artist, committing to produce the official song for the tournament as well as other key music at the finals with ‘We Are The People’ with Bono and The Edge as end result. Recently, Garrix was voted #1 DJ in DJ Mag’s Top 100 DJs poll for the fourth time in his career.

There’s no doubt that this ability to reinvent his brand and fearlessly experiment with his sound, by filtering its many streams of creativity to the masses with such ease, is an undeniable testament to his talent and longevity, ultimately driving his legendary narrative even further.

JVKE traveled a tried-and-true road to a fresh, focused, and fiery sound. The Rhode Island-born singer, songwriter, and producer logged countless hours on multiple instruments since the age of three, discovered production by high school, and crafted the kind of pop anthems that soar and surprise all at once. Powered by buoyant beats, lithe guitar, and unshakable hooks, he has amassed over 600 million streams, 26+ billion views of his music across YouTube, TikTok, and Instagram, built an audience of 10 million-plus followers across social media, and attracted the support of everyone from Charli D’Amelio to Charlie Puth. JVKE continues to establish himself as his current single “golden hour” rises on the charts, currently at #21 at Top 40 radio, having been on the Billboard Hot 100 for 12 consecutive weeks and counting. The track has been streamed nearly 250 million times worldwide and JVKE delivered a powerful performance of the track on The Tonight Show Starring Jimmy Fallon. Most recently, JVKE was named the MTV PUSH artist for October 2022.  JVKE’s breakout hit “Upside Down” went viral following release in 2020 and has generated over 200 million streams to date. The song’s meteoric success led to a Charlie Puth remix collaboration, which earned both JVKE and Charlie a 2021 Trending VMA nomination. JVKE followed up the success of his debut single with a series of releases in 2021 including his second viral hit single “this is what falling in love feels like” and teamed up with global DJ superstars, Galantis, on “Dandelion,” a joint release that has accumulated over 100 million streams to date. In addition to his viral hit singles, JVKE’S production work has been featured on Eric Bellinger’s GRAMMY® nominated album New Light. He also made his live debut with two sold out performances in New York City and Boston, in addition to his festival debut at Corona Capitol in Mexico City in November 2021.