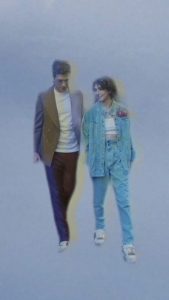 The video was purpose-designed for Instagram Stories. It will appear in 2 consecutive 24 hour cycles, each offering the viewer a different kind of interaction. Fans will be able to engage and react to it in real-time, use polls and lyric stickers, and use the video’s Augmented Reality effects into their own Stories. A day after the 2nd cycle, the full video will be made available via Mark’s IGTV.

The Pieces of Us video is a collaboration between Sony Music UK’s 4th Floor Creative and Facebook Creative Shop, with Creative Direction from Marriage.  Shot entirely on phones by Director Clare Gillen, it uses real-time AR effects with zero post-production. A world first, the video is a unique showcase for the creative alternatives new technology can bring to traditional music video production.

Ronson spent the first eight years of his life growing up in London, England before moving with his family to New York City.  Already a keen student of music, and a huge fan of hip hop, he was 16 when he first began creating mixtapes and trying his hand at DJing. That early passion set him on a path to music production, recording and songwriting that has resulted in a career highlighted by work on a multi Grammy-winning album by Amy Winehouse, as well as his own Grammy-winning, global smash hit with Bruno Mars, “Uptown Funk.”  Along with releasing four successful albums under his own name, his resume includes production work for some of music’s biggest names, including Adele, Paul McCartney, Duran Duran and Lily Allen. More recently, he helmed Lady Gaga’s acclaimed fifth album, Joanne and Queens Of The Stone Age’s lauded Villains.  In 2018 he released a string of singles with Diplo under the name Silk City, including the current world wide hit “Electricity” with Dua Lipa, which earned him a Grammy Award for “Best Dance Recording” in 2019.

He is a co-writer of the song “Shallow,” recorded by Lady Gaga and Bradley Cooper for the movie A Star Is Born, for which he earned an Academy Award for “Best Original Song,” a Golden Globe Award for “Best Song Written for a Motion Picture,” and 2 Grammy Awards.

He is currently based in Los Angeles where he operates his record label, Zelig Records, home to fast rising star King Princess. To date, Ronson has 1 Academy Award, 7 Grammy Awards, 2 Brit Awards, 1 Golden Globe Award and 1 MTV VMA Award to his name.

Born and raised in Brooklyn, NY, King Princess is a vocalist, multi-instrumentalist and songwriter. The product of a musical family, she spent much of her childhood tinkering on the vintage Neve board in her father’s Brooklyn studio, learning guitar and piano along the way.  Her 2018 debut single, an ode to untold queer histories titled “1950,” became an overnight smash hit with over 200 million streams to date. The song has achieved Gold status in the United States, Canada and Norway and is Platinum in Australia. Her debut EP, Make My Bed, marked the first release for Mark’s Zelig Records and was released to critical acclaim from Rolling Stone, Complex, Refinery29, Billboard, Highsnobiety, Interviewand Vogue among others. Since, King Princess has graced the covers of V Magazine, The Ingenue, Jalouse and The Travel Almanac. She’s played sold out shows across North America and Europe with festival debuts at Coachella, Glastonbury, Governors Ball, Bonnaroo, Lollapalooza and many more. King Princess’ debut album, Cheap Queen, is set for release this fall.