Mark Ronson Presents the Music of “Spies in Disguise” – Lead Track “Then There Were Two” by Mark Ronson and Anderson .Paak Out Now 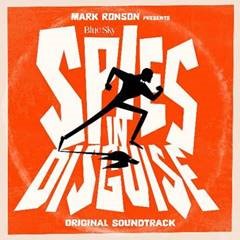 (New York- November 18, 2019) –Today the track list for Mark Ronson Presents the Music of “Spies in Disguise” was announced. The soundtrack is executive-produced by GRAMMY®, Oscar® and Golden Globe®-winning musician, D.J., songwriter and producer Mark Ronson.  In addition, lead track “Then There Were Two” by Mark Ronson and Anderson .Paak is available now. LISTEN HERE.

Born Brandon Paak Anderson in Oxnard, California, as a teen he played drums in his church band and later famously worked at a marijuana farm, all while honing his musical chops and in pursuit of his dreams. And while shining glimpses of his extraordinary talent were evident in his first incarnation as Breezy Lovejoy, it was fully realized in his transformation into Anderson .Paak, with his debut album Venice and a stellar six-song run on Dr. Dre’s certified Gold COMPTON album, that stoked anticipation for what would be the perfect storm of his sophomore release, 2016’s Malibu. The album was a sonic wonder met with universal rave reviews receiving GRAMMY® nods for Best New Artist and Best Urban Contemporary Album, nods for the BET Hip Hop Award’s Best New Hip-Hop Artist and the NME Award’s Best New Artist.

His 2018 release Oxnard marked a career high for him debuting as the #1 Independent album in the country according to Billboard as well as debuting at #5 on the Rap chart, #6 on the Hip Hop/R&B chart and #11 on the Top 200. The phenomenal album was executive produced by Dr. Dre and features the likes of hip-hop legends Kendrick Lamar, Snoop Dogg, J. Cole, Q-Tip, and Pusha T.

More recently .Paak had a monster single in “Bubblin” that saw a Jimmy Kimmel Live! performance and won him his first GRAMMY® for Best Rap Performance in 2019. He released his newest album Ventura that debuted at #4 on the Billboard Top 200 on April 12th via Aftermath Entertainment, exclusively distributed by 12 Tone Music, LLC. The project features Smokey Robinson, André 3000, Jazmine Sullivan, Brandy, Nate Dogg, Lalah Hathaway and Sonyae Elise. His Best Teef in the Game tour to support the album was sold out and included his first Madison Square Garden headline show and 24 other stops across the US and Canada.

Lucky early on in life discovered his love of music and natural gift for singing and songwriting in the musical melting pot that is New Orleans, where he was born. The devastation of Hurricane Katrina displaced his family and they ended up moving to the small town of Tyler, TX. Ultimately Lucky knew he wanted to pursue music so he moved to Atlanta for a brief stint and eventually ventured to Los Angeles to pursue his dream. After meeting D’Mile and working with him on what would become his debut album Painted (released in May), Lucky fully realized his voice and potential. His undeniable talent as a vocalist took shape and landed at him at his label home, Keep Cool, in partnership with RCA Records.

Lucky’s live show continues to gain new fans for the multi-talented singer-songwriter. His recent appearance on NPR’s Tiny Desk was notable, packing the small stage with a full 10-piece band and extended horn section, yet still allowing his incredible voice to cut through. Fans, peers and critics also saw Lucky perform at the 2019 BET Awards on the Music Matters stage where he delivered an electrifying performance of “Roll Some Mo” before he headed to his hometown of New Orleans to play at the 25th Anniversary Essence Festival. Additionally he has played other festivals including Something in The Water, Afropunk Atlanta and Lights On Festival. Lucky is currently on his first ever North American headlining tour, which will see him hit 25 cities across Canada and the US this fall.

Born and raised in LA, the genre-bending talent didn’t fully discover her artistic voice until attending Humboldt State University. After graduating from Humboldt, Dodgr took yet another step further into the “fish out of water” mentality, moving to Portland in pursuit of music despite the city’s known reluctance to hip-hop. Noticing a local scene beginning to grow, she quickly developed a loyal following whom she compares to the love of an “adoptive” family. Offering refreshing, genre-agnostic music, she became one of the city’s premiere talents, and eventually met fellow Portland artist Amine, who invited her to accompany him as a background vocalist during his first Fallon performance in 2016. Now a few years removed from the performance, Dodgr has grown her loyal audience exponentially, even boasting collaborations with Anderson .Paak and Portgual. The Man, among others. Dodging genres, labels, and even the stereotypical move back to LA, she dares to be different in the age of immediacy — a prideful testament to her resolute character and even more so, a reflection of Dodgr’s artistic integrity.

Blue Sky Studios presents “Spies in Disguise,” an animated spy comedy adventure set in the slick, high-octane, globe-trotting world of international espionage. Super spy Lance Sterling (Will Smith) and scientist Walter Beckett (Tom Holland) are almost exact opposites. Lance is smooth, suave and debonair. Walter is…not. But when events take an unexpected turn, this unlikely duo is forced to team up for the ultimate mission that will require an almost impossible disguise – transforming Lance into the brave, fierce, majestic…pigeon. Walter and Lance suddenly have to work as a team, or the whole world is in peril.

Listen to Mark Ronson and Anderson .Paak’s “Then There Were Two”: 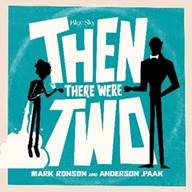 Pre-Order/Pre-Save Mark Ronson Presents the Music of “Spies in Disguise”: