MORRIS TO BE ONE OF THREE ARTISTS

IN CAMPAIGN TO LAUNCH NEWEST SPEAKER FROM BOSE: 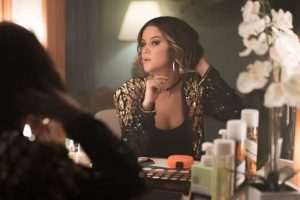 Nashville, TN – Columbia Nashville GRAMMY® Award-winning singer/songwriter Maren Morris is honored to be chosen as one of three artists, worldwide, to partner with premiere audio giant BOSE, in collaboration with VICE Media, in launching “Bring the Micro;” a special campaign highlighting the sound quality and portability of BOSE’s newest speaker, the SoundLink Micro.

The “Bring the Micrco” campaign will feature three digital films featuring Maren Morris, global music sensation Niall Horan and up-and-coming UK singer Ray BLK. The short films will show how mundane moments can be spontaneous when the artist remembers to “Bring the Micro.”

The creative development of the short films was led by VICE Media and were shot in London as well as Nashville, and showcase a creative twist which sees the artist perform classic tracks.

The first film, featuring Morris, will premiere on November 13, followed by Horan’s on November 20, and Ray BLK’s on November 27 across the United States, United Kingdom, France and Germany. Additional media will run across VICE’s digital platforms, as well as Bose’s.

The full partnership is in collaboration with Bose, VICE, CAA Brand Consulting, Mediahub in the USA and Mediacom in Europe.

Twenty-seven year old Columbia Nashville singer/songwriter Maren Morris has quickly established herself with vocal styling’s that reflect her country, folk and pop influences. Armed with sheer talent, honest lyrics and a completely magnetic presence, Morris’ label-debut album, the GOLD-certified HERO, released via Columbia Nashville on June 3, 2016. One week after it was available, HERO entered the Billboard Country Albums chart at No. 1 and No. 5 on the Billboard Top 200 Chart, which spans across all genres. With this, the Arlington, Texas native became the first artist in the history of Columbia Nashville to open at No. 1 on the Billboard Country Charts with a debut album in the Soundscan era. Morris’ debut single from HERO, “My Church,” set a record at U.S. Country radio by having the most chart reporting stations to play a debut single by a country artist with 107 stations the week it hit the airwaves in addition to being certified PLATINUM by the RIAA.

Kicking off 2017 Morris took home the GRAMMY® for BEST COUNTRY SOLO PERFORMANCE for “My Church” at the 59th Annual GRAMMY® Awards in addition to having the most nominations for a Country music artist with FOUR to her credit including BEST NEW ARTIST, BEST COUNTRY ALBUM (HERO) and BEST COUNTRY SONG (“My Church”). She received SIX nominations for the 52nd Academy of Country Music Awards including Female Vocalist of the Year, New Female Vocalist of the YeaR which she took home the trophy for, Album of the Year (as artist and producer) for HERO, and Single Record of the Year (as artist and producer) for “My Church.” Morris was also named Radio Disney’s BEST NEW COUNTRY ARTIST at the 2017 Radio Disney Music Awards. In the fall of 2017 Morris received three nominations for the 51st Annual CMA Awards including nominations for FEMALE VOCALIST OF THE YEAR as well as MUSIC VIDEO OF THE YEAR and MUSICAL EVENT OF THE YEAR, both for the No. 1 hit song “Craving You” by Thomas Rhett (featuring Maren Morris).

About Bose Corporation
Bose Corporation was founded in 1964 by Dr. Amar G. Bose, then a professor of electrical engineering at the Massachusetts Institute of Technology.  Today, the company is driven by its founding principles, investing in long-term research with one fundamental goal: to develop new technologies with real customer benefits.  Bose innovations have spanned decades and industries, creating and transforming categories in audio and beyond.  Bose products for the home, in the car, on the go and in public spaces have become iconic, changing the way people listen to music.

Bose Corporation is privately held.  The company’s spirit of invention, passion for excellence, and commitment to extraordinary experiences can be found around the world — everywhere Bose does business.