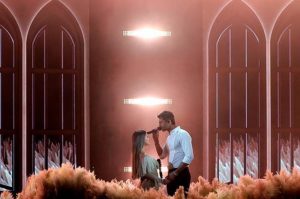 April 19, 2021—Maren Morris won ‘Female Artist of the Year’ for the second year in a row and ‘Song of the Year’ for her triple-Platinum, Grammy-nominated smash hit “The Bones” at the 2021 ACM Awards last night.

Additionally, Maren and her husband, singer-songwriter Ryan Hurd, performed “Chasing After You,” their first official duet together. The track was the most added at US country radio upon impact and continues to receive critical acclaim. The couple will perform the song on “Late Night With Seth Meyers” on May 5th.

Maren’s single “The Bones”—from her massively acclaimed, record-shattering 2019 album GIRL—dominated 2020, topping the Billboard Hot Country Songs chart for 19 consecutive weeks and becoming the first solo female multi-week #1 at US country radio since 2012, and 5x Platinum in Canada. She recently performed the track with John Mayer at the 2021 Grammy Awards.