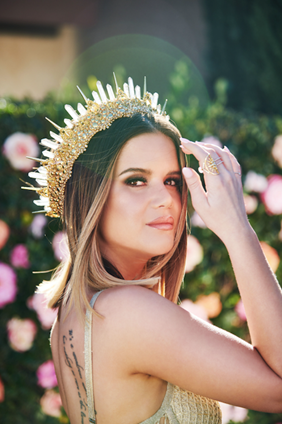 Nashville, TN – GRAMMY Award-winning singer-songwriter Maren Morris set to release her new song “Girl” tomorrow, Thursday, January 17th. The highly anticipated new track can be heard for the first time when it makes its world premiere on the Country radio airwaves beginning 4 PM Central / 5 PM Eastern. Fans can tune into their Country radio station of choice to hear “GIRL” for the very first time. Immediately following the world premiere of “GIRL,” fans will be able to stream and download the new song on all digital music platforms.

The rousing new recording was written by Morris and Sarah Aarons (“The Middle,” Zedd/Maren Morris/Grey), along with GRAMMY Award-winning songwriter and producer Greg Kurstin (Adele, Sia), whom is credited for producing “GIRL.”

Almost three years, to the day, from when “GIRL” will hit the radio airwaves, Morris was first introduced when her debut single, the now 2x PLATINUM, GRAMMY-Award winning, “My Church,” landed at Country radio.

Since then Morris has gone on to release the PLATINUM “80s Mercedes,” GOLD “I Could Use A Love Song,” her first U.S. No. 1 country radio single as both the performer and songwriter, and most recently the Canadian GOLD–certified hit “Rich,” which peaked at No. 1 at Canadian radio. Tomorrow, “GIRL,” will mark the fifth career single for the 28-year-old Texas native and will serve as the first music to be released from Morris’ forthcoming 2019 album and follow-up to the 2016 critically acclaimed, GOLD-certified album, HERO.

Before “GIRL,” Morris first began her musical journey 16 years ago when she first picked up the guitar at the age of 12. Two years later, at 14, Morris had immersed herself into the local music scene by performing in the nearby saloons and live music clubs of the Fort Worth/Arlington area, with her father at her side managing the budding singer-songwriter. Always the one to challenge, especially challenging herself, Morris pushed further without rest. Before she would turn 15, Morris would visit Los Angeles to be in the inaugural class of GRAMMY camp. Nearly fourteen years later Morris would be a GRAMMY-Award winner, in addition to having the most nominations for a Country music artist that year with FOUR nominations to her credit including BEST NEW ARTIST, BEST COUNTRY ALBUM (HERO) and BEST COUNTRY SONG (“My Church”).

It’s that journey, and the experiences and unique challenges along her path, that has brought Morris from 2003 to 2019. When the powerhouse vocalist belts “Girl, don’t hang your head low. Don’t lose your halo. Everyone’s gonna be okay, baby, girl” it’s evident that those words are from a place of experience and lessons learned.

Twenty-eight-year-old Columbia Nashville singer/songwriter Maren Morris has quickly established herself with vocal styling’s that reflect her country, folk and pop influences. Armed with sheer talent, honest lyrics and a completely magnetic presence, Morris’ label-debut album, the GOLD-certified HERO, released via Columbia Nashville on June 3, 2016. One week after it was available, HERO entered the Billboard Country Albums chart at No. 1 and No. 5 on the Billboard Top 200 Chart, which spans across all genres. With this, the Arlington, Texas native became the first artist in the history of Columbia Nashville to open at No. 1 on the Billboard Country Charts with a debut album in the Soundscan era. Morris’ debut single from HERO, “My Church,” set a record at U.S. Country radio by having the most chart reporting stations to play a debut single by a country artist with 107 stations the week it hit the airwaves in addition to being certified DOUBLE PLATINUM by the RIAA.

Later in 2016 Morris released her second radio single, “80s Mercedes,” which reached PLATINUM status by the RIAA and Music Canada, just before she tied for the most nominations with FIVE at the 50th Annual CMA Awards, including Album of the Year (HERO), Female Vocalist of the Year, Single of the Year (“My Church”), Song of the Year (“My Church”) and New Artist of the Year which she won, marking her first CMA Award. She was tapped by Billboard Magazine to receive the Billboard ‘BREAKTHROUGH ARTIST’ Award at the 11th annual Billboard Women in Music Gala as well as being awarded the Breakthrough Artist Award by the Music Business Association at Music Biz 2017.

Kicking off 2017 Morris took home the GRAMMY for BEST COUNTRY SOLO PERFORMANCE for “My Church” at the 59th Annual GRAMMY Awards in addition to having the most nominations for a Country music artist with FOUR to her credit including BEST NEW ARTIST, BEST COUNTRY ALBUM (HERO) and BEST COUNTRY SONG (“My Church”). She received SIX nominations for the 52nd Academy of Country Music Awards including Female Vocalist of the Year, New Female Vocalist of the YeaR which she took home the trophy for, Album of the Year (as artist and producer) for HERO, and Single Record of the Year (as artist and producer) for “My Church.” Morris was also named Radio Disney’s BEST NEW COUNTRY ARTIST at the 2017 Radio Disney Music Awards. In the fall of 2017 Morris received three nominations for the 51st Annual CMA Awards including nominations for FEMALE VOCALIST OF THE YEAR as well as MUSIC VIDEO OF THE YEAR and MUSICAL EVENT OF THE YEAR, both for the No. 1 hit song “Craving You” by Thomas Rhett (featuring Maren Morris). In addition, she received her fifth career GRAMMY Award-nomination for BEST COUNTRY SOLO PERFORMANCE (“I Could Use A Love Song”) for the 60th Annual GRAMMY Awards. She wrapped 2017 with the conclusion of her first-ever headlining HERO Tour 2017, which also included dates in the U.K.

To begin 2018, Maren notched her first U.S. No. 1 country radio single for the PLATINUM-certified “I Could Use A Love Song,” as both the performer and songwriter, when it topped both the Billboard Country Airplay and Mediabase Country charts in January 2018. In May 2018 Morris took home the trophy for TOP COUNTRY FEMALE ARTIST at the 2018 Billboard Music Awards, marking her first Billboard award. Though rooted deeply in country music, Morris has acquired a global, non-genre specific, fan base. It’s that global fan base’s appetite that Morris began to feed in 2018 by hitting the road with Niall Horan on the Flicker World Tour 2018 which spanned across New Zealand, Australia, Canada and the USA as well as collaborating with electronic house DJ and producer Zedd, along with electronic duo, Grey, for the smash hit, “The Middle,” which spent SIX weeks at No. 1 at Top 40 Radio and FIVE weeks at No. 1 at Hot AC radio. Morris’ own recent single for Country radio, the sassy fan favorite “Rich,” reached No. 1 on the Country radio charts in Canada. Morris concluded 2018 with the high-note-book-end of receiving FIVE nominations for the upcoming 61st GRAMMY Awards to be held in February 2019. The nominations include Record of the Year [all genre] (“The Middle” – Zedd, Maren Morris & Grey), Pop Duo/Group Performance (“The Middle” – Zedd, Maren Morris & Grey), Country Solo Performance (“Mona Lisas and Mad Hatters”), Country Duo/Group Performance (“Dear Hate” – Maren Morris feat. Vince Gill) and Country Song (“Dear Hate” – Maren Morris feat. Vince Gill). In addition, the songwriters of the Zedd/Maren Morris/Grey-performed massive hit “The Middle” received a nomination for the all genre, general field category, Song of the Year.