100% OF MORRIS’ PROCEEDS OF “DEAR HATE (FEAT. VINCE GILL)” TO BE DONATED TO LAS VEGAS NONPROFITS FOR IMMEDIATE AND LONG-TERM NEEDS OF VICTIMS IN THE SHOOTING 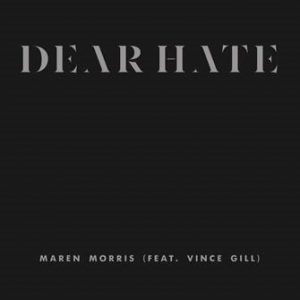 Morris, who performed at the festival the night prior to the shooting, made “Dear Hate (feat. Vince Gill)” available Monday afternoon via YouTube, less than 24 hours after what is being called the largest mass shooting in U.S. history.

Because of the overwhelming response to the song on YouTube and Morris’ social media, Columbia Nashville released the song of hope, in the face of hate, to digital service providers for purchase and/or streaming.

Morris also announces that 100% of her proceeds from “Dear Hate (feat. Vince Gill)” will be donated to Las Vegas nonprofits for immediate and long-term needs of victims in the shooting at the Route 91 Harvest Festival via the Music City Cares fund.

The song, “Dear Hate (feat. Vince Gill)”, was written by Morris, Tom Douglas and David Hodges in 2015, two days after the church shooting in Charleston, South Carolina, Morris tells Rolling Stone. Morris adds that she “never knew when to release it,” until now.

The song that sings the truth that “Loves gonna conquer all” features the vocals of multi-GRAMMY Award-winner, Country Music superstar, Vince Gill who appeared on the track for gratis.

Indeed, Love will conquer all.

Dear hate,
I saw you on the news today
Like a shot that takes my breath away
You fall you like rain
Cover us in drops of pain
I’m afraid that we just might drown

Dear Hate,
Well, you sure are color blind
Your kiss is the cruelest kind
You could poison any mind, just look at mine
Don’t know how this world keeps spinning round and round

Dear Hate,
You were smiling from that Selma bridge
In Dallas when those bullets hit and Jackie cried
You pulled those towers from the sky
But even on our darkest nights
The world keeps spinning round

Dear Love,
Just when I think you’ve given up

About Maren Morris
Twenty-seven year old Columbia Nashville singer/songwriter Maren Morris has quickly established herself with vocal styling’s that reflect her country, folk and pop influences. Armed with sheer talent, honest lyrics and a completely magnetic presence, Morris’ label-debut album, the GOLD-certified HERO, released via Columbia Nashville on June 3, 2016. One week after it was available, HERO entered the Billboard Country Albums chart at No. 1 and No. 5 on the U.S. Billboard Top 200 Chart, which spans across all genres. With this, the Arlington, Texas native became the first artist in the history of Columbia Nashville to open at No. 1 on the Billboard Country Charts with a debut album in the Soundscan era. Morris’ debut single from HERO, “My Church,” set a record at Country radio by having the most chart reporting stations to play a debut single by a country artist with 107 stations the week it hit the airwaves in addition to being certified PLATINUM by Music Canada and the RIAA.  Maren’s second single, “80’s Mercedes” is GOLD-certified in Canada.

Kicking off 2017 Morris took home the GRAMMY for BEST COUNTRY SOLO PERFORMANCE for “My Church” at the 59th Annual GRAMMY Awards in addition to having the most nominations for a Country music artist with FOUR to her credit including BEST NEW ARTIST, BEST COUNTRY ALBUM (HERO) and BEST COUNTRY SONG (“My Church”). She received SIX nominations for the 52nd Academy of Country Music Awards including Female Vocalist of the Year, New Female Vocalist of the YeaR which she took home the trophy for, Album of the Year (as artist and producer) for HERO, and Single Record of the Year (as artist and producer) for “My Church.” Morris was also named Radio Disney’s BEST NEW COUNTRY ARTIST at the 2017 Radio Disney Music Awards.