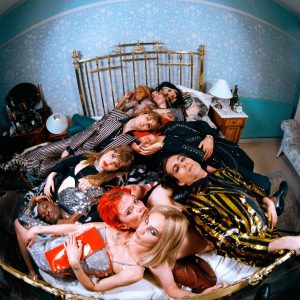 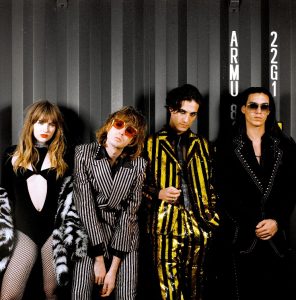 Filmed in London and directed by Bedroom projects (The 1975) and Ben Chappell (Arctic Monkeys, Nine Inch Nails), the cinematic visual sees the Gucci-styled band cast in their own script for blockbuster single ‘Supermodel’. Combining classic elements of Tarantino and Hitchcock, the band perfectly captures the song’s fierce mood and playful lyrics as a series of catastrophic events unfold.

Måneskin writes, “We wanted to pay tribute to our favourite ‘90s movies in the Supermodel music video. We tried to capture a cinematic vibe about an enigmatic character in the track and we wanted the visual to reflect that. After we came up with the idea, we worked closely with the directors and Ben to recreate frame shots and sequences from our favourite 90s films. We had so much fun filming it in London, playing funny scenes that reminded us of a detective B-movie.”

Bedroom comments, “The Måneskin video was a project that was inspired by the references of a mixture of 90s films like Run Lola Run, Reservoir Dogs, as well as, Hitchcock and a bit of 1950s Hollywood. The macguffin of the mysterious purse was something out of Marnie or Pulp fiction. Shot on Super 16.”

“This video came about after a week of sitting around the pool in LA with the band thumbing through 90s Vogue magazines and talking about our favorite 90s movies. We tried to sneak in as many small references as we could throughout the video.”  Ben Chappell adds.

Produced with pop prodigy Max Martin and his team, the band launched their current  single ‘Supermodel’ earlier this month with a surprise performance at the Eurovision Song Contest. The California-soaked  rock anthem is loosely based on characters they met during their time in LA. “You want to hang out with this supermodel, but you might get in trouble. It’s like cigarettes: you love them but you know they’re gonna fucking kill you.” the band described in their recent NME Big Read cover interview.

The band will kick off their world tour “LOUD KIDS TOUR” on October 31 with a sold out show at their opening night in Seattle, followed by a run of sold out gigs across North America – including three in Canada, two in New York, Washington, San Francisco and Atlanta before embarking on their recently expanded European leg in 2023 – playing iconic venues including London’s O2 Arena, Accor Arena in Paris and Berlin’s Mercedes Benz Arena.  For all tour dates, tickets and information, please visit: www.vivoconcerti.com

2022 will see the fast rising band warm up for their North America tour dates with a group of major festival appearances this summer, including Lollapalooza, Reading & Leads, Summer Sonic Festival, Rock in Rio, Aftershock and more. After a year of success, with 237 global certifications including 10 diamond discs, 185 platinum and 42 gold, Måneskin are the most listened to Italian artists in the world on Spotify. Last year saw Måneskin conquer the UK with their smash hits “I Wanna Be Your Slave” and “Beggin’”, becoming the first Italian band in history of music to crack the UK Top 10 Chart with two singles simultaneously. The song IWBYS also boasts a riotous version – an iconic collaboration with the Godfather of Punk Iggy Pop, released on August 6, 2021. And when they put their new European tour on sale, all tickets sold out in the space of two hours!  Måneskin recently  upgraded their European shows to iconic venues including London’s O2 Arena, Accor Arena in Paris and Berlin’s Mercedes Benz Arena. Other achievements include their double nomination at The BRIT Awards 2022 for ‘International Group’ and ‘International Song’, as well as their MTV European Music Awards win for ‘Best Rock’, the first ever win for an Italian artist in an international category. Their triumph in the US has been just as impressive. Måneskin held two special concerts in New York and Los Angeles and were special guests at The Rolling Stones’ concert in Las Vegas. They have also performed on prime TV shows, Jimmy Fallon’s Tonight Show and The Ellen DeGeneres Show, and did an outstanding performance of “Beggin’” and ‘I Wanna Be Your Slave” for their debut appearance on Saturday Night Live, not to mention their first time playing at the legendary Coachella Festival this year. Following a whirlwind of a year, Måneskin recently received double nominations for best ‘Rock Song’ and ‘Rock Artist’ at the Billboard Music Awards and was hailed in Forbes 30 under 30 for Europe.