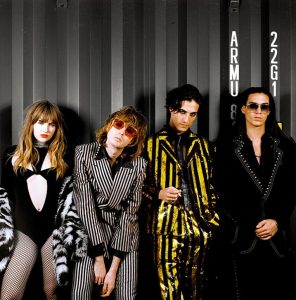 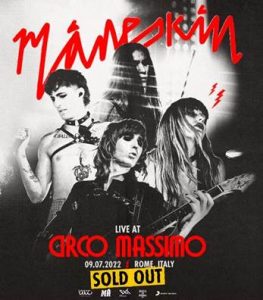 Continuing their special relationship with global fans in the TikTok community, chart-topping global rock superstars Måneskin have exclusively premiered a unique vertical format music video for their surging summer single “SUPERMODEL”.   This follows in the footsteps of the bands’ landmark worldwide breakout track “Beggin’” – which was ranked as the second most popular track globally across the platform in 2021 with over 9.2M video creations, and multiple other special content moments, such as the first “Live From Berlin” performance which reached over a million unique viewers. The premiere makes Måneskin the first European artist (and only the second worldwide) to have collaborated with TikTok to release an exclusive video.

Since the song’s late May release, “SUPERMODEL” quickly grabbed “Greatest Gainer / Most Added” status across numerous radio charts and has now surged to #3 at alternative radio across the United States, as well as Top-10 across all rock radio and a fast Top-30 entry and rising at Pop stations. In addition, “SUPERMODEL” saw a recent Tonight Show performance go viral, spotlighting a ‘joined-the-band’ moment with Jimmy Fallon, and has already been heralded by multiple media outlets as a top ‘Song of Summer’ contender.

The band are touring major European festivals such as Opener Park, Pinkpop Sweden, Lollapalooza Sweden and Paris, Rock Im Park, and are about to play at Lollapalooza Chicago and Rock in Rio.

Måneskin are preparing for a milestone homecoming show in Italy tonight (July 9th), with a completely SOLD-OUT concert set for Rome’s historic Circo Massimo (Circus Maximus). The band is then set to return to stages in The United States with a July 31st appearance at Lollapalooza in Chicago, and then their highly anticipated run of fall dates as part of their global “Loud Kids Tour”.

The band will kick off their world tour “LOUD KIDS TOUR” on October 31 with a sold out show at their opening night in Seattle, followed by a run of sold out gigs across North America – including three in Canada, two in New York, Washington, San Francisco, Boston, Washington, Philadelphia and Atlanta before embarking on their recently expanded European leg in 2023 – playing iconic venues including London’s O2 Arena, Accor Arena in Paris and Berlin’s Mercedes Benz Arena.  For all tour dates, tickets and information, please visit: www.vivoconcerti.com

2022 will see the fast rising band warm up for their North America tour dates with a group of major festival appearances this summer, including Lollapalooza, Reading & Leads, Summer Sonic Festival, Rock in Rio, Aftershock and more. After a year of success, with 237 global certifications including 10 diamond discs, 185 platinum and 42 gold, Måneskin are the most listened to Italian artists in the world on Spotify. Last year saw Måneskin conquer the UK with their smash hits “I Wanna Be Your Slave” and “Beggin’”, becoming the first Italian band in history of music to crack the UK Top 10 Chart with two singles simultaneously. The song IWBYS also boasts a riotous version – an iconic collaboration with the Godfather of Punk Iggy Pop, released on August 6, 2021. And when they put their new European tour on sale, all tickets sold out in the space of two hours!  Måneskin recently  upgraded their European shows to iconic venues including London’s O2 Arena, Accor Arena in Paris and Berlin’s Mercedes Benz Arena. Other achievements include their double nomination at The BRIT Awards 2022 for ‘International Group’ and ‘International Song’, as well as their MTV European Music Awards win for ‘Best Rock’, the first ever win for an Italian artist in an international category. Their triumph in the US has been just as impressive. Måneskin held two special concerts in New York and Los Angeles and were special guests at The Rolling Stones’ concert in Las Vegas. They have also performed on prime TV shows, Jimmy Fallon’s Tonight Show and The Ellen DeGeneres Show, and did an outstanding performance of “Beggin’” and ‘I Wanna Be Your Slave” for their debut appearance on Saturday Night Live, not to mention their first time playing at the legendary Coachella Festival this year. Following a whirlwind of a year, Måneskin recently received double nominations for best ‘Rock Song’ and ‘Rock Artist’ at the Billboard Music Awards and was hailed in Forbes 30 under 30 for Europe.

‘in 2022 Måneskin have been on an ever-growing drive for world domination, winning over supporters across the globe with their flamboyant rock’n’roll. Just how successful they’ve become, though, is evident with one glance across the Open’er site as the band walk out to begin their performance. The crowd already fills half the field and, by the end of the set, it stretches back even further – it feels entirely possible that most people in attendance at the festival are watching the Italian band right now.’

‘SUPERMODEL’ is a sun-stained anthem full of vibrant chords and jangly melodies. But dig a little deeper and you will find a story of someone pushing themselves to their limits in the name of being out there in the public eye. It’s a juxtaposition of heartbreaking imagery and party-starting grit, which is an amazing point to hit with a song.

“Måneskin may have released the song of the summer. The Italian rock band knows how to write a catchy hit, and their latest single is no exception… But beneath the song’s catchy surface… [and] Damiano David’s sultry vocals… ‘Supermodel’ produced by Max Martin… explores the dark side of celebrity-obsessed culture … Måneskin’s message is loud and clear — do not be fooled by her charm.”