TORONTO, ON – June 10, 2022 – Global Latin music idol, Maluma, has just released his new album, The Love & Sex Tape, a production permeated with urban swagger that is a rollercoaster of emotions underscoring love, heartbreak, lust, passion and adrenaline, all flowing with irresistible dembow grooves. In The Love & Sex Tape, we hear a more urban, street and explicit Maluma, with the essence as well as the beat with which the Colombian star jump-started his outstanding career. To stream and/or download Maluma’s new album The Love & Sex Tape, click here.

“More than a decade into my career, I was missing that essence that inspired me from the beginning and I felt a need to communicate with the streets as well as fans who love the urban rhythm that has defined me from the start; that’s why I decided to make this album. The Love & Sex Tape represents my duality and a 2022 version of my original sound,” Maluma expressed.

The superstar also premiered the music video for Nos Comemos Vivos with Chencho Corleone, produced and directed by his very own Royalty Films. Watch the music video here.

The album cover features an image of his beloved dog, Buda, who the artist says represents his own shadow. Buda has been his faithful adventure companion with whom Maluma has shared many life experiences. He is artistically depicted on the cover designed by renowned contemporary artist, Joseph Klibansky.

Fulfilling one of his lifetime dreams, Maluma recently performed a historic concert at the iconic Atanasio Girardot Stadium in his hometown of Medellin, in front of more than 53,000 people and a global audience via livestream on Amazon Prime. He continues his Papi Juancho Maluma World Tour in Mexico this month, performing last Saturday at a sold-out VFG Arena in Guadalajara, Jalisco. The spectacular tour continues with two consecutive shows, today and tomorrow June 11th at the Palacio de los Deportes in Mexico City, before returning to Europe with more dates, including a second date at the WiZink Center in Madrid, where he recently set an all-time audience assistance record.

About MALUMA
Maluma is one of the leading voices in Latin music and a bona fide global youth idol. Born Juan Luis Londoño in Medellin, Colombia, he formulated his artistic moniker Maluma from the first two letters of the names of his mother, father and sister.

The 2018 Latin GRAMMY award winner for Best Contemporary Pop Vocal Album (for F.A.M.E.) is one of social media’s most popular artists with over 25 million Facebook fans, 8 million Twitter followers, and a whopping 62 million Instagram followers, making him the leading Latin male artist on Instagram and the first and only one to surpass 50 million followers. His official YouTube/VEVO channel has more than 28.1 million subscribers, having earned him a YouTube Diamond Play Button Award.

With his Maluma World Tour he has achieved unparalleled success, having sold over one million tickets in 105 worldwide concerts in 2017 alone and becoming the top concert-selling Latin artist in the world. In 2018 and 2019, he broke records achieving full houses in all of his shows throughout the United States and Europe selling out Madison Square Garden (New York), the American Airlines Arena (Miami) and two The Forums (Los Angeles), among others. With his 11:11 World Tour he also sold out Israel’s largest venue, Yarkon Park in Tel Aviv (60,000+ audience); made history at the 18th annual Mawazine Festival in Rabat, Morocco, setting an all-time attendance record with his headlining concert in front of 200,000 people; and performed for the first time ever in Riyadh, Saudi Arabia in front of 25,000.

In 2018, Maluma entered the fashion scene with his edgy, youthful and authentic look, and style. He has been named a “Menswear Icon in the Making” and “Men’s Fashion’s Newest Muse” by Vogue. In addition, he was one of GQ’s “Men of the Year” in 2019 and continues to gain the fashion support of designers such as Kim Jones (Dior), Jeremy Scott (Moschino), Olivier Rousteing  (Balmain), Donatella Versace, Calvin Klein, Christian Louboutin, Louis Vuitton and more. In 2019, he attended the Met Gala for the first time, being one of the first Latin urban artists of this generation to be invited by Anna Wintour.  Maluma has also released top campaigns and commercials as the face of global brands such as Moet Hennessy, Michelob and Adidas.

Maluma’s altruistic spirit is outstanding for the community work he leads with his foundation, El Arte de Los Sueños, based in Medellín, Colombia. Founded in 2016, the Foundation’s mission is to transform at-risk youth through art and music education. In 2021, Maluma acted in his first Disney animation movie, Encanto, 2022 Oscar winner for Best Animation Feature. Earlier this year, Maluma debuted in Hollywood with his starring role as Bastian in the movie, Marry Me, alongside Jennifer Lopez and Owen Wilson. 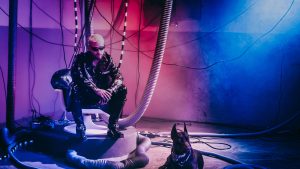