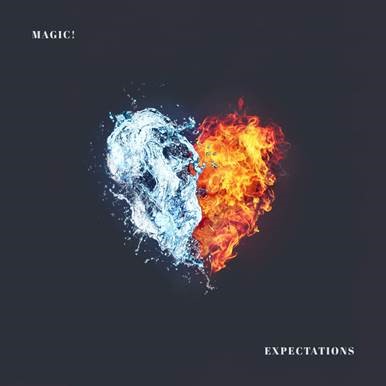 Nasri, the lead singer of the group said of making the album, “This album was the result of needing a creative outlet to work through some challenges in my relationship. It was after we finished recording Expectations that I realized the album was deeply personal and essentially became a concept album centered around my relationship.  I hope fans can hear and feel the honesty in my lyrics, and I hope that it helps them get through similar life and love obstacles.”

Earlier this summer, the group released the first single and music video for “Kiss Me” (click here to watch).  The track has nearly 5 million streams on Spotify while the music video has over 18 million views.

MAGIC! is composed of Grammy Award-winning songwriter/producer Nasri (lead vocals), Mark Pelli (guitar), Alex Tanas (drums) and Ben Spivak (bass). The band made their mark with hit single “Rude,” released in 2014 before exploding into viral popularity. In Canada, “Rude” is certified 5x Platinum, peaked top 10 on the Digital Songs Chart and peaked at #1 at HotAC at radio. Holding the #1 spot on Billboard’s Hot 100 chart for six weeks, “Rude” simultaneously dominated the charts globally, hitting #1 in 41 countries. The track has been streamed nearly 500 million times on Spotify and the upbeat, quirky video for the single has seen over 1.3 billion VEVO views.