NEW SINGLE “ALL MY FRIENDS” OUT NOW 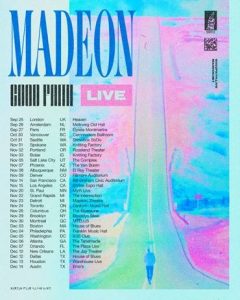 “The mid-tempo funky cut brings those Random Access Memories-era Daft Punk feelings, but with a modern, sun-drenched vibe to it.” – Complex

“‘All My Friends’ is light, airy and slightly psychedelic…an unabashedly pop sing-along with a walking disco groove and all manner of shimmery, summery sonics.” – Billboard

Artist / producer Madeon has confirmed a headline tour for fall – watch the announcement video HERE. Following his performance at Lollapalooza, where he will debut an all new live show, the 30-city Good Faith Live tour will head to North America after stops in London, Amsterdam and Paris. The North American leg kicks off October 30 in Vancouver, BC and will stop in major markets across the U.S. and Canada before wrapping in Austin, TX on December 14 – see full list of tour dates below. Tickets for the tour will go on sale to the general public on Friday, June 28 at 10am local time. Please visit HERE for additional information.

The tour announcement comes on the heels of Madeon’s new single “All My Friends,” available now via Columbia Records. The track marks the introduction to Good Faith, the new era of Madeon, and is his first offering since his debut album Adventure and his massive collaborative project with Porter Robinson, “Shelter.” Madeon is the lead vocalist on the track, which he also wrote and produced entirely himself.

Adventure was released in 2015 to critical praise from press including Pitchfork, who noted that “on the path to what feels like something huge, Madeon’s journey is just beginning” and The Fader, who described it as “expansive, impossibly beautiful…one of the most radiant pop albums in recent memory,” Adventure was also featured on various “Best of 2015” lists including Complex, who pronounced it “an audio journey that can best be described as rapturous.”

“All My Friends” is available everywhere now. For up to date information on Madeon please visit  https://madeon.net//.

Hugo Leclercq, the musician known as Madeon, first became known in 2011 when he live sampled 39 hits, from Daft Punk to Solange, to create his frantic yet perfectly sculptural “Pop Culture,” which instantly propelled the then-17-year-old to the international stage. By the time he released his debut album Adventure in 2015, Madeon was a globally beloved artist with production credits for Lady Gaga and Coldplay. Soon after, he teamed with Porter Robinson for their immersive, ecstatic single “Shelter.” Now, a few years later, Madeon is perhaps a more deeply seasoned artist than wide-eyed dreamer from Nantes, France — but he’s just as ambitious as ever. “All My Friends” is the radiant introduction to this new era. 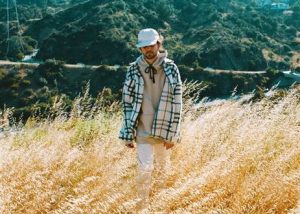