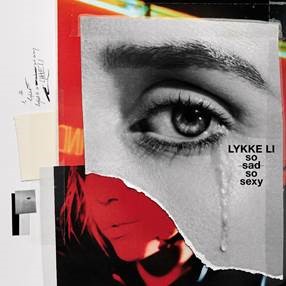 so sad so sexy is available for pre-order now including the album’s lead single, “deep end,” produced by Jeff Bhasker, Malay, and T-Minus and “hard rain,” produced by Rostam Batmanglij.

Since the release of her debut EP Little Bit in 2008, Lykke Li has become an iconic staple of the indie-pop world with a decade-spanning career. With three celebrated studio albums, Lykke received critical raves from “Best Album of the Year” nods from the likes of The New York Times and Rolling Stone to performing at the world’s most revered music festivals including Glastonbury and Coachella.

Prior to recording this album, Lykke was busy nurturing liv, her love-child with Andrew Wyatt, Björn Yttling, Pontus Winnberg and Jeff Bhasker, which allowed this collective a mutual creative outlet.  Outside of music, Lykke Li is a partner in YOLA Mezcal – a brand created in collaboration with her friends Gina Correll Aglietti (chef and stylist) and Yola Jimenez (activist and Mexican entrepreneur), who the mezcal is named after. In addition, she starred in Terrance Malik’s 2017 film Song to Song alongside Ryan Gosling.

This summer, Lykke will be performing at the BBC’s Biggest Weekend Festival in Belfast, All Points East in London, Chicago’s Lollapalooza and more. Visit lykkeli.com for schedule.

so sad so sexy Tracklist:

Pre-order so sad so sexy: http://smarturl.it/LLSoSadSoSexy