PLATINUM-selling ACM & iHeartRadio Music Awards Nominee Honoured by
the Country Music Hall Of Fame in the “American Currents: The Music of 2017” Exhibit 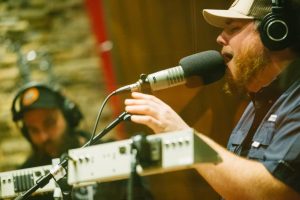 Nashville, Tenn. (March 8, 2018)  – Academy Of Country Music & iHeartRadio Music Awards nominee, Luke Combs, teams with Spotify for an installment of the “Spotify Singles” campaign to bring fans a bluesy, soul-filled cover of Ed Sheeran’s “Dive” written by Sheeran, Julia Michaels and Benny Blanco, and a stripped down acoustic version of “One Number Away”, the third single from the PLATINUM-selling singer-songwriter’s critically-celebrated debut album This One’s For You.

On his sold-out global first-ever headlining Don’t Tempt Me With A Good Time Tour, Combs surprises audiences with an ever-evolving set-list and frequently adds his pedal-steel, country-soul infused version of Sheeran’s “Dive” to the show. Combs, a long-time fan of Sheeran’s songwriting forte, quickly seized the opportunity to put his vocal and musical perspective on the song with Spotify Singles campaign. In addition to “Dive”, Combs releases a rootsy-acoustic rendition of his Top 30 and climbing single, “One Number Away” that “shows off Combs’ impressive chops” (Rolling Stone) and “delivers sulky, circling, R&B-schooled licks in [Combs’} rugged timbre” (NPR).

Continuing to be “one of the format’s burliest and brightest rising stars” (Vulture), Combs has been honored by The Country Music Hall Of Fame and Museum as a featured artist in the newest exhibit, “American Currents: The Music Of 2017” alongside country stars Eric Church, Miranda Lambert, Maren Morris, John Prine, Brothers Osborne and more. Chronicling the most significant moments in country music history in the past year, the Country Music Hall Of Fame’s newest exhibit features a test vinyl pressing of Combs’ debut album This One’s For You along with his signature black Columbia PFG fishing shirt and the hat he wore in the filming of his “Hurricane” music video, which has amassed more than 108 million views.

Heralded by Billboard as the “Top New Country Artist of 2017”, Combs embarks on the international leg of his sold-out first-ever headlining Don’t Tempt Me With A Good Time Tour this week. Combs joins the star-packed line-up for the Country 2 Country global music festival with shows in Dublin, Glasglow and making his debut appearance in London at The O2 Arena. After wrapping in Europe, Combs heads across the world to Australia to join CMC Rocks and perform his first-ever headlining shows in Melbourne and Newtown.

Fans can keep up with Combs’ tour dates, new music and more by visiting LukeCombs.com.

ABOUT LUKE COMBS
With gritty, grizzled vocals, brazen songwriting talent and a dynamic live show, River House Artists/Columbia Nashville singer-songwriter Luke Combs stormed onto the Country music landscape as “one of the format’s burliest and brightest stars” (Vulture). The Asheville, North Carolina native released his critically-acclaimed debut album This One’s For You in 2017 debuted at No. 1 on the Billboard Country Albums chart in the U.S. Combs’ debut PLATINUM-certified smash radio single “Hurricane” set Country radio history in the U.S. topping both the Billboard Country Airplay chart and Mediabase chart for two consecutive weeks – rendering Combs the first debut country artist to hold a multi-week No.1 since Florida Georgia Line’s “Cruise” and the first new solo Country male artist in the U.S. to accomplish the feat since Blake Shelton with “Austin” in 2001. Combs made history once more when “When It Rains It Pours”, the PLATINUM-certified second single off his debut project, landed at No. 1 at two-weeks at Country radio; the last debut male to achieve back-to-back chart toppers off a debut album was Sam Hunt. “One Number Away”, the third single from Combs’ debut project, is at Country radio now. A CMA, CMT, iHeartRadio and ACM Award-nominated artist, Combs has performed on NBC’s Today and ABC’s Jimmy Kimmel Live! and received critical praise from NPR, American Songwriter, Washington Post, Billboard, Variety and more. After college at Appalachian State, Combs, a true road warrior, built his avid fan base, developing his trademark through delivering rowdy, hold-nothing-back shows. By 2014 when Combs followed his calling to Nashville, Tennessee, he had an army of fans behind him, three self-released EPs and a set list full of songs that are true, authentic and demonstrate his signature modern throwback sound. Combs is currently on his sold-out first headlining Don’t Tempt Me With A Good Time Tour, has performed on all-star lineups for CMA Music Fest, Bonnaroo & Austin City Limits and joins Jason Aldean on his nationwide tour beginning May 2018.