LUKE COMBS SCORED THREE CONSECUTIVE WEEKS AT NO. 1 WITH “WHEN IT RAINS IT POURS” IN CANADA 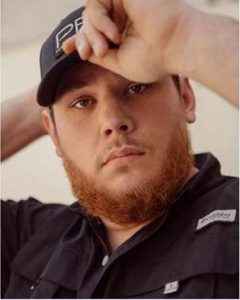 Nashville, Tenn. – CMA Awards New Artist Of The Year nominee Luke Combs scored three consecutive weeks at No. 1 on country radio in Canada with RIAA GOLD-certified single “When It Rains It Pours.” The song today topped the Billboard Country Airplay charts in the U.S. The newly minted smash hit, co-penned by Combs, Ray Fulcher and Jordan Walker, notches more than 89 million streams worldwide and over 34 million views on the single’s larger than life music video.

“When it rains, it really does pour! This year has been such a fun ride. I have to thank my fans, first and foremost, for making this second number one happen. They tell me all the time that they call their stations to request the song because they just love it and relate to the story,” shares Combs. “Huge thanks to country radio as well for believing in the music and me – without you guys this just doesn’t happen.”

Combs’ critically-praised debut album This One’s For You has spent 18 weeks inside the Top 5 spot on Billboard Country Albums chart since its release in June 2017 and spurred back-to-back No. 1 chart-topping hits “When It Rains It Pours,” which is certified Gold in Canada, and history-making debut single “Hurricane,” which is certified Platinum in Canada. The North Carolina native broke U.S. country radio records in May when his Platinum-certified smash hit “Hurricane” secured the No. 1 spot on both Billboard Country Airplay and Mediabase charts in the U.S. for two weeks rendering Combs the first debut male artist to achieve a multi-week No. 1 since Blake Shelton accomplished the fete with “Austin” in 2001.

Earlier this month, Combs launched his sold-out headlining Don’t Tempt Me With A Good Time Tour bringing along “When It Rains It Pours” co-writer, Ray Fulcher, and rising new stars Josh Phillips and Faren Rachels. Known for his tireless dedication to his live show craft, Combs and friends will make stops in 25 markets before the tour wraps in the headliner’s hometown of Asheville, N.C. where he will play his first ever arena at U.S. Cellular Center. In addition to headlining dates, Combs has joined the line-ups for the nation’s top festivals this year including Austin City Limits, Bonnaroo, CMA Fest and Tortuga Music Fest.

To stay to up-to-date on Luke Combs, visit LukeCombs.com.