Watch “One Number Away” Here 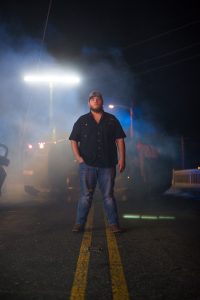 Nashville, Tenn.  –  River House Artists/Columbia Nashville Platinum artist Luke Combs releases the poignant, cinematic music video for his new single “One Number Away” from his critically-acclaimed debut album This One’s For You. Taking an unexpected twist on the song’s narrative, Combs created and penned the video treatment – a creative first for the singer-songwriter – with a reimagined storyline of the powerful emotion of two people being just a moments distance from being together. Watch the new video for “One Number Away” here.

After headlining his first-ever arena in his hometown of Asheville, N.C. last December for the final fall show on the Don’t Tempt Me With A Good Time Tour, Combs and the team filmed over three days in Forest City, N.C. against the Blue Ridge Mountains wintry backdrop which set the tone and mood for the video. Combs teamed up once again with director Tyler Adams of TA Films, who led music videos for Combs’ PLATINUM-certified single “Hurricane” and GOLD-certified single “When It Rains It Pours” which have notched more than 173 million views.

“‘One Number Away’ is a song that the fans have latched on to from the very first time they heard it. They sing it back to us every night, so I wanted to make sure we had a video that was as powerful as the song,” shares Combs. “One day at a creative session, the idea hit me: it wasn’t as much about a break up as it was losing someone that you can’t get back, and that’s why I had the idea of the crash.  That feeling when you want to pick up the phone to call that person, and they aren’t there, that is something that all of us can relate to in one way or another.”

“The first time that we heard this song, we knew the video had to be special. With a song this powerful, we needed the video to poke at the heart of the audience. Our goal in everything we produce is to get the audience to have an emotional response, whether they are laughing, crying, or are inspired,” says Adams. “After meeting with Luke and his team over lunch for an impromptu music video writing session, we came up with the concept for “One Number Away.” We wanted a story that everyone can relate to in some way, so the video fits the typical breakup story mold for 97% of the video before a twist at the end. The story is crafted so that each viewer can interpret it differently, but by the end of the video, we hope to have moved everyone the same way emotionally.”

Combs hits the road this week to launch the 25-city spring leg of his Don’t Tempt Me With A Good Time Tour with two back-to-back sold out headlining nights at Nashville’s legendary Ryman Auditorium on February 2 and 3. For tickets, music and more on Luke Combs, visit LukeCombs.com.

ABOUT LUKE COMBS:
River House Artists/Columbia Nashville singer-songwriter Luke Combs, stormed onto the Country music landscape as “one of the format’s burliest and brightest stars” (Vulture) in 2017 with PLATINUM-certified radio single, “Hurricane” and GOLD-certified single “When It Rains It Pours,” from his debut album, This One’s For You. Named U.S. Billboard’s  Top 100 Artist and Top New Country Artist of 2017, Combs made country radio history as the first new solo male artist to achieve a multi-week No. 1 with a debut single since 2001. ACMA, CMT and iHeartRadio Award nominated, Combs has performed on NBC’s Today and ABC’s Jimmy Kimmel Live! and received critical praise from NPR, American Songwriter, Washington Post, Billboard and more. The 27 year-old Asheville, North Carolina native is currently on his sold-out first headlining Don’t Tempt Me With A Good Time Tour, has performed on all-star lineups for CMA Music Fest, Stagecoach & Austin City Limits and joins Jason Aldean on his nationwide tour beginning May 2018.