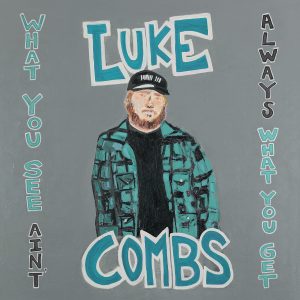 NASHVILLE, Tenn.—Luke Combs’ anticipated new deluxe album, What You See Ain’t Always What You Get, is out today on River House Artists/Columbia Nashville. Stream/purchase HERE. The special extended edition features all 18 songs from Combs’ platinum-certified, global No. 1 record, What You See Is What You Get, as well as five new tracks including a collaboration with Amanda Shires.

In celebration of the release, Combs will perform a special livestream concert tonight at 7:00 p.m. ET/6:00 p.m. CT via his Facebook page. Combs’ first full-band performance since the start of the COVID-19 pandemic, the event is free to view with all donations made during the show benefitting The Recording Academy’s MusiCares.

Continuing his triumphant run at country radio, Combs’ single, “Lovin’ On You,” recently spent multiple weeks at No. 1 on both the Mediabase/Country Aircheck chart and the Billboard Country Airplay chart. This is Combs’ ninth-consecutive No. 1 single—a first on Billboard’s Country Airplay chart—as well as his eighth single to spend multiple weeks atop the chart, sixth-consecutive, multi-week No. 1 and fourth single to spend four or more weeks at No. 1. Moreover, his current single, “Better Together,” is at country radio and climbing up the charts week over week.

Combs also recently made history as the first artist ever to have their first two studio albums spend 25 weeks or more at No. 1 on Billboard’s Top Country Albums chart—breaking Taylor Swift’s previously held record at 24 weeks. The achievement comes as What You See Is What You Get topped the chart for the 25th time earlier this summer, while his 2017 debut, This One’s For You, has spent 50 non-consecutive weeks at No. 1—tying the record for the longest reign atop the chart with Shania Twain’s Come On Over in 1997.