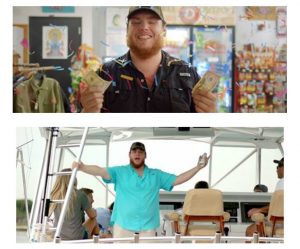 Nashville, Tenn. – River House Artists/Columbia Nashville singer-songwriter Luke Combs hits a surprise stroke of good luck in the narrative video for his hit single “When It Rains It Pours” premiering today on VEVO.  Combs co-wrote the video treatment with director Tyler Adams and recruited his high school best friends to join him for the two-day shoot over the Fourth of July holiday weekend in Charleston. Living out the song’s storyline, the video follows Combs and friends as the artist, starring as the lead, strikes good fortune after the abrupt end of a relationship.

Watch the “When It Rains It Pours” music video here

“Every night on tour when we start playing “When It Rains It Pours”, you can feel the fans kick it up a notch. It’s just a fun song and I always think ‘Damn, I kinda wanna be this guy in the song. He’s got it figured out.’ So for the video, I convinced my buddies to meet me in Charleston, we traced the footsteps of the song for two days at the beach and somehow they let us film it as an official music video,” explains Combs. “I hope the fans have as much fun watching this as we had making it.”

Fans can catch Combs’ live show on the road this fall as he embarks on his headlining Don’t Tempt Me With A Good Time Tour kicking off October 3rd in Los Angeles and making stops in 25 markets across the U.S. Acclaimed for his hold-nothing-back live performances, Combs fans can expect hits from his recent album This One’s For You as well as favorites from the singer/songwriter’s first three EPs. Pre-sale tickets are available now and general on-sale starts this Friday, August 18th on LukeCombs.com.

Roaring into 2017 with power, the Asheville, N.C. native nabbed early “artist to watch” recognition from Billboard, Pandora, Amazon Music, Rolling Stone and more before releasing This One’s For You to critical praise in June. His debut single “Hurricane” is PLATINUM-certified in both Canada and the U.S and earlier this summer, Combs made U.S Country radio history when “Hurricane” held the No. 1 spot for two consecutive weeks.