THIRD ALBUM FROM ECHO KLASSIK NEWCOMER OF THE YEAR 2017 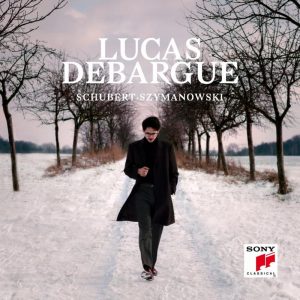 For his eagerly anticipated third Sony Classical album, Lucas Debargue continues his passionate exploration of unfamiliar and unexpected repertoire.  On his new recital he recorded a monumental but rarely-performed work: Karol Szymanowski’s Sonata No. 2 (1911) and two so-called ‘little’ sonatas by Schubert: D664 in A major and D784 in A minor. “I am feeling like a very deep duty is to go as deep as possible in some pieces that are very well known by the musicians and the audience, like the Schubert sonatas – mostly the A major one – but also to give the opportunity to some audiences to get to know some pieces that they don’t have the opportunity to hear very often”, says Debargue.

Lucas Debargue’s 2017 performance schedule includes appearances at Club Musical de Quebec on December 4 in Quebec City, at the Royal Conservatory of Music in Toronto on December 5 and with La Mason Symonphonique on December 9 in Montreal.   An appearance at Carnegie Hall takes place on December 7, 2017.

The new CD includes two sonatas by Schubert in A major (D664) and A minor (D784) are not unfamiliar pieces, but have been hampered somewhat by being labelled as ‘little’ sonatas; the term is relative, and used to distinguish them from the much longer late sonatas. But Debargue is keen to dispel it altogether. ‘Some pianists pay a lot of attention to the big three last sonatas of Schubert. But it was interesting for me to explore the ‘little’ ones, which are not little at all. In fact they’re huge if you consider the range of emotion and contrasts within them.’ The earlier one was composed for a young woman when Schubert was just 22, and is a piece full of youthful joie de vivre. ‘It’s very full of life and inspiration – and even childish sometimes, but in a good way.’ The later one was written just four years later, but it was after Schubert had already begun to suffer from the syphilitic symptoms which would eventually go on to claim his life at the age of just 31. ‘He expresses it with very simple musical material, but you must communicate this fear, and this expectation of death.’

The other major work on the album is by one of Poland’s greatest composers, Karol Szymanowski (1882 – 1937), whose opera King Roger has recently been establishing a stronger foothold on world stages. But much of his piano music is terra incognita. In the century after the great Arthur Rubinstein premiered Szymanowski’s Sonata No. 2 in 1911, the work has only infrequently been heard in concert. ‘This sonata is one of the best of its time. You have a huge, romantic first movement. Then a succession of variations. And it closes with a huge wonderful fugue’, says Debargue.

He’s excited to become a champion of a neglected work in whose power he believes wholeheartedly. ‘It’s understandable that only a few pianists choose to play this piece, because it’s such a challenge, physically and intellectually. But audiences love it, because even if the music is complex, the message is beautifully clear.’

Lucas Debargue, who was born in Paris in 1990, but who was raised near the small French town of Compiègne, did not touch a piano until he had reached 11 – an extraordinarily late age for a future virtuoso. But at the age of 17, he dropped the instrument entirely. He took up the bass guitar instead and joined a rock band.

The call of the keyboard was not extinguished, however: merely dormant. At 20, he returned to the piano with such ferociously renewed energy that he was quickly accepted as a student of the celebrated Russian teacher Rena Shereshevskaya in Paris. She looked beyond his quirky past, and immediately saw a performer of unique potential. His rise was rapid. When he appeared in the Tchaikovsky Competition in Moscow in 2015, he was the only performer who had never appeared in any other major competition nor had experience playing with a symphony orchestra. Although he was placed fourth overall, he was described as the “real winner” by media and the world’s press was soon buzzing with news about this mesmerising and unconventional musician. “There hasn’t been a foreign pianist who has caused such a stir since Glenn Gould’s arrival in Moscow, or Van Cliburn’s victory at the Tchaikovsky Competition,” said The Huffington Post.

He was also awarded the prize of the Moscow Music Critics’ Association as “the pianist whose incredible gift, artistic vision and creative freedom have impressed the critics as well as the audience”. Soon after he was signed to Sony Classical. His first recording, of which the centrepiece was Ravel’s fiendishly taxing Gaspard de la nuit, was universally acclaimed for its poetic brilliance. His second album, which included the ‘hidden jewel’ Sonata No 1 by Nikolai Medtner, also received rave reviews. ‘A five-star performance of burning intensity’ said Pianist Magazine, and also earned Debargue the coveted Echo Klassik 2017 ‘Newcomer of the Year’ award.