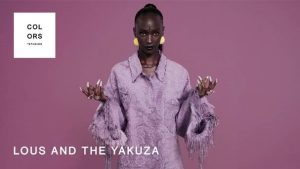 Today Lous and the Yakuza introduces her fourth single “Bon Acteur” from her forthcoming debut album Gore through a Colors Show recorded in their Berlin studios earlier this month. The track is also available on all DSPs HERE.

The song tells a love story fueled by games, lies but also hope. A romantic admiration that can quickly turns into pain when romance is paced by violence and tenderness, war and peace, desire and resignation. This speaks against treason as a wake-up call for loyalty and faithfulness.

This song is another echo to Lous’ musical and visual plurality, creating a unique style where pop meets hip hop, trap becomes soft, chanson is a protest.

Lous’ debut single “Dilemme” released a few months ago now gathers 25M+ streams worldwide. Lous and the Yakuza’s debut album Gore was produced by El Guincho and recorded in Paris, Brussels and Barcelona. Gore will be out in the Fall this year.