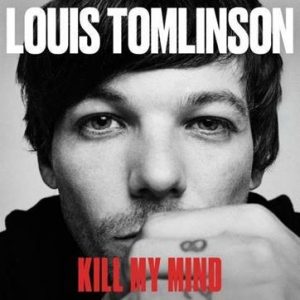 The song marks a change of direction for Louis’s music, and one he is happy and proud to present to the world.

Louis says: “‘Kill My Mind’ is a song about having fun and doing silly things when you’re younger. It’s about going through an experimental phase in your youth, and doing things that might not be good for you, but they are exciting!”

“The next few songs I have coming out finally represent me as an artist. For a while I was recording music that I thought would get me on the radio. I felt like I had to make a certain sound of music, but then I had a moment where I sat and thought, I just need to make music that is true to myself.

I met Jamie Hartman [Rag’N’Bone Man co-writer and producer], and I finally felt like I saw eye to eye with a producer. We were on the same page and the last bunch of sessions I’ve done have really produced songs that I’m proud of. I want to be able to move people with words. I want my lyrics to be honest and say things that matter and mean something.”

Last month, Louis picked up the Best Song Award at the 2019 Teen Choice Awards for his recent single ‘Two Of Us’, which has so far hit 40 million streams on Spotify, with YouTube views at 23 million.

Louis already has several hit solo singles to his name, including the club-ready Steve Aoki collaboration “Just Hold On” and brooding Bebe Rexha duet “Back to You”. Overall Louis’s solo music has garnered over a BILLION streams.

In 2018 Louis won an iHeart Award for ‘Best Solo Breakout’, and an EMA Award for ‘Best UK & Ireland Act’ in 2017. He was ranked No.5 on Billboard’s emerging artists of 2018 and has over 60 million combined followers on social media. As a member of One Direction, Louis has sold over 100 million records.

Now Louis is gearing up for the release of his debut solo album. “I spent a long time working out where I sat in the industry, but I finally feel like I’ve found my place. I’ve learnt to trust my gut and be involved in every aspect of my career. I’ve got some amazing, dedicated fans who have stayed loyal. Now I can finally say these tracks are coming, the album is coming and the tour is coming. I feel excited about everything!”