TEAM UP FOR NEW SINGLE “AMNESIA” 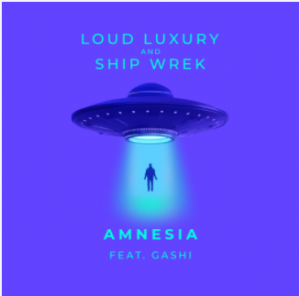 With their worldwide smash hit “Body (feat. Brando),” Loud Luxury is officially certified Diamond (10x Platinum) in Canada, 6x Platinum in Australia, 3x Platinum in Switzerland, Double Platinum in Austria, Denmark, U.K. and the U.S., and Platinum in the Netherlands, Norway and Sweden. “Body” also held the #1 spot in the U.S. Mediabase Dance Airplay chart for two weeks, charted in the Top 40 of U.S. Pop radio and the U.K.’s Official Singles Chart (#4) and accumulated over a billion plays across the most popular streaming services. Its follow-up single, “Love No More (with anders),” garnered 12 million streams on Spotify alone in its first month and currently sits at over 140 million plays on the streaming platform, while “I’m Not Alright (with Bryce Vine)” adds to the tally with almost 80 million streams. Last year, the duo scooped up three 2020 JUNO Awards nominations for ‘Dance Recording Of The Year’, ‘Fan Choice Award’ and ‘Group Of The Year’ (including one win) following four nominations (including one win) in 2019 as well as iHeart Music Awards nominations for ‘Dance Song Of The Year’ and ‘Dance Artist Of The Year’ in 2020.

Los Angeles-based duo Ship Wrek, composed of Tripp Churchill and Collin Maguire, came together in 2019 and have quickly become one of the most prolific production teams in the electronic music scene. Known for their unique and signature sound, the duo has released originals and remixes that have caught the attention of music fans, press, and industry heavyweights alike. Ship Wrek has gained support from artists such as Skrillex, Dillon Francis, Diplo, Jauz, The Chainsmokers, DJ Snake, Chris Lake, Zedd, and Tiesto, all of which have played out their edits and music or collaborated with the duo. Their recent releases include “Obsession” with Valentino Khan and their debut EP Mirror Mirror, which included “It’s My House” with Dillon Francis.

GASHI delivers personal, introspective lyrics over hazy, atmospheric synths and beats. Early in his career, he fluidly switched between tough rapping and yearning, sentimental crooning before adopting a moody pop-meets-R&B sound on releases such as 2020’s full-length 1984.