A GLOBAL SMASH, “BODY” IN THE U.S. IS RIAA-CERTIFIED GOLD AND

MUSIC CANADA HAS CERTIFIED THE SONG 7X PLATINUM IN CANADA

ON YOUTUBE, THE “BODY” LYRIC VIDEO HAS A TOTAL OF 100 MILLION VIEWS

“LOVE NO MORE” OUT NOW ON ARMADA MUSIC

IS CERTIFIED PLATINUM IN CANADA 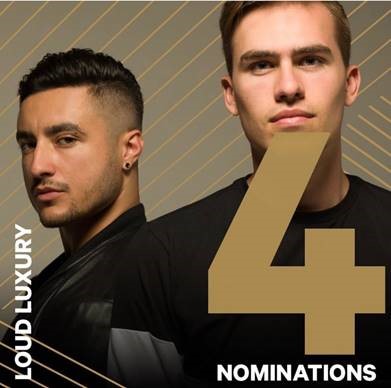 In Canada, “Body” is certified as 7x Platinum by Music Canada and was #1 on Shazam for 16 consecutive weeks. The song dominated airwaves, peaking at #1 at radio on CHR and AC, and #2 on Hot AC. LOUD LUXURY performed at Toronto’s 2018 IHEARTRADIO MMVAs as the show’s first ever official DJs for the night and took home the coveted award for Song of The Summer. “Body” was the #1 song overall on radio nationally. The Mediabase Year End Chart ranked “Body” as the #1 Top 40 Song.

Meanwhile in the United States, “Body” was the most played song on dance radio for all of 2018. Currently it continues to sit on many key charts such as Shazam Top 100, Billboard Hot 100, Spotify Top 200, iTunes Top 100, Pandora Top 100, Mediabase Pop Chart and Mediabase Dance Chart. At radio it receives Top 40 support from key stations like NYC’s Z-100, AMP Los Angeles, Kiss Chicago, B96 Chicago, AMP Boston, AMP Detroit and Sirius HITS 1. It is now RIAA-certified Gold in the U.S. and has over 500 million streams through all DSP platforms (with almost 400 million on Spotify alone).

At the same time, LOUD LUXURY and fellow Toronto native and singer anders are supporting “Love No More”—a pop-laden punch mixed in with deep house booms – which CBC Music called a “solid follow up to ‘Body’.” “Love No More” is certified Platinum in Canada by Music Canada and debuted on the U.S. Billboard Hot Dance/Electronic Songs chart at No. 27. Listen to “Love No More” here or watch the music video here: https://www.youtube.com/watch?v=PJF0SBwfDq8

With just a handful of releases under their belt, the Los Angeles-based, Ontario-native duo has garnered the support of tastemakers such as Tiesto, Gorgon City, and Dzeko & Torres, to name a few, in addition to being included in Billboard Dance‘s monthly Ones to Watch discover series.