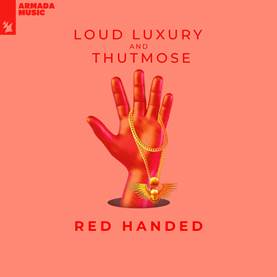 May 14, 2021 – Loud Luxury have been making all the right moves as of late, and their next collab is a sterling example of that. Following on from their recent link-up with Shipwrek and GASHI titled ‘Amnesia’ and a rework of global hit ‘Turning Me Up (Hadal Ahbek)’ alongside Jordanian artist Issam Alnajjar and Ali Gatie, the Canadian hotshots are teaming up with Nigeria-born, Brooklyn-based rapper and singer-songwriter Thutmose to deliver ‘Red Handed’, their latest release on leading dance music label Armada Music.

An anthem for breaking free and not putting up with anyone’s lies and deceit, ‘Red Handed’ ties the club-cultured sounds of Canadian superstars Loud Luxury to the killer vocal delivery of Thutmose. Oozing with confidence and instant dance floor appeal, this track is shaping up to be the next notable addition to Loud Luxury and Thutmose’s hit-packed discographies, accompanied by a cool music video that features, among others, shuffle dancer Vanesa Seco.

“Growing up in Toronto, we were surrounded by a melting pot of music and culture”, Loud Luxury say. “It has always been important to us to incorporate that into our sound. Meeting and working with Thutmose was a privilege to bring these influences to life, and the result is ‘Red Handed’.”

“Excited to be releasing this anthem with Loud Luxury”, Thutmose adds. “I can’t wait for everyone to hear what we’ve created together; I know a lot of people will be able to relate to it, for better or worse.”

With their worldwide smash hit ‘Body’ (feat. Brando), Loud Luxury—who is Canadian duo Andrew Fedyk and Joe De Pace—is officially certified Diamond (10x Platinum) in Canada, 6x Platinum in Australia, 3x Platinum in Switzerland, Double Platinum in Austria, Denmark, U.K. and the U.S., and Platinum in the Netherlands, Norway and Sweden. ‘Body’ also held the #1 spot in the U.S. Mediabase Dance Airplay chart for two weeks, charted in the Top 40 of U.S. Pop radio and the U.K.’s Official Singles Chart (#4) and accumulated over a billion plays across the most popular streaming services. Its follow-up single, “Love No More (with anders),” garnered 12 million streams on Spotify alone in its first month and currently sits at over 140 million plays on the streaming platform, while “I’m Not Alright (with Bryce Vine)” adds to the tally with over 80 million streams. In 2020, the duo released their debut EP ‘Nights Like This’, followed by single releases ‘Like Gold’ featuring Stephen Puth with Frank Walker and ‘Amnesia’ featuring GASHI with Ship Wrek. Loud Luxury also scooped up three 2020 JUNO Awards nominations for ‘Dance Recording Of The Year,’ ‘Fan Choice Award’ and ‘Group Of The Year’ (including one win) following four nominations (including one win) in 2019 as well as iHeart Music Awards nominations for ‘Dance Song Of The Year’ and ‘Dance Artist Of The Year’ in 2020.  Their latest single ‘Turning Me Up’ with Issam Alnajjar and Ali Gatie is out now on all streaming platforms.

Born in Lagos, Nigeria and moving to Brooklyn, NY at age 9, Thutmose faced hardships including the SWAT team breaking into his house. Dropping out of college to fold clothes and save money for studio time, Thutmose moved on to create many impactful moments including being the only independent artist on the Grammy-nominated Spider-Verse soundtrack and the only artist in Scott Storch’s documentary, supporting Billie Eilish on her first tour, voicing a character in League Of Legends (biggest video game in the world) and performing both in front of 100 million people online and in a sold-out arena in Paris, all the while seeing his music placed in FIFA, Silicon Valley, GoPro, How High 2 and more. He literally lit himself on fire for the artwork of his debut mixtape ‘Man On Fire’ and has collaborations with Rema, Pink Sweat$, Tory Lanez, Desiigner, Jay Critch, Alex Mali and more.