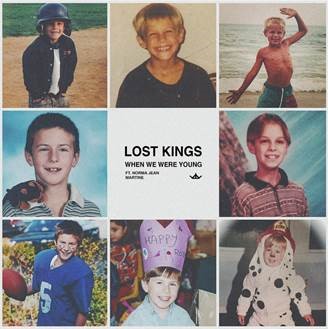 The duo stated, “When we were young, really is inspired by the carefree Neverland like feeling you have when you are a child growing up. LA is our home and it’s always felt like a Neverland to us, it reminds us of the times spent running around with our friends playing in our neighborhoods.”

2017 was a big year for Lost Kings as they were named Google Play’s #1 artist to watch and released some of their biggest hits to date.  Most recently, the guys have released their hit single “First Love” ft. Sabrina Carpenter, which currently has over 25 million streams on Spotify and their follow up track “Don’t Call” which has nearly 10 million streams on Spotify.  In addition, they released “Look At Us Now” ft. Ally Brooke and A$AP Ferg, “Quit You” ft. Tinashe and “Phone Down” ft. Emily Warren.  All the tracks have reached nearly 125 million streams combined on Spotify.

Lost Kings consists of Los Angeles based Robert Gainley and Dr. No. In a little over two years, they have risen up through the ranks of new producer talents gaining over 157 million total streams worldwide and have had 14 #1s on Hype Machine.  Getting their start in 2016, their debut single, “Bad” entered the Spotify global viral chart at #15 while their single “You” has over 3 million video views and over 12 million streams on Spotify.   They have created official remixes for the likes of Rihanna, Imagine Dragons, Echosmith, Krewella, Vance Joy, Life of Dillon, Halsey, Tori Kelly and more.

To Purchase or Stream “When We Were Young” feat. Norma Jean Martine: