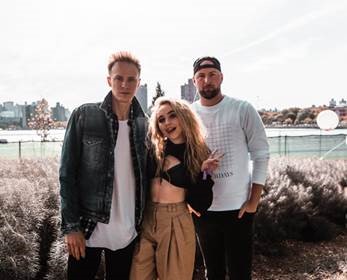 (New York, New York) – DJ duo Lost Kings release their newest track and music video for “First Love” ft. Sabrina Carpenter (Click here to watch).  The track, which is produced by Lost Kings, is available today at all digital providers via Disruptor Records / RCA Records.  The music video was shot in NYC last month, when the duo and Sabrina met up to premiere the track at the Electric Zoo Festival.  Following their performance Billboard said the track was a “radio friendly, dance-pop beat.”

Named as Google Play’s #1 artist to watch in 2017, “First Love” comes on the heels of their highly successful tracks, “Look At Us Now” ft. Ally Brooke and A$AP Ferg, “Quit You” ft. Tinashe and “Phone Down” ft. Emily Warren.  The tracks have reached over 52.5 million streams combined on Spotify.

In addition to continuing their residency at the Wynn Las Vegas, Lost Kings will hit the road this fall/winter playing various shows in New York, Chicago, San Diego, Seattle any many more. Tour dates listed below.  The duo spent the past summer playing festivals all over the world including Ever After Music Festival, Escapade Music Festival, Milwaukee Summerfest, Ultra Asia, Electric Zoo Festival, Dancefestopia, KAABOO Del Mar and more.

Lost Kings consists of Los Angeles based Robert Gainley and Dr. No. In a little over a year, they have risen up through the ranks of new producer talents gaining over 30 million plays on Soundcloud, over 55 million streams on Spotify and have had 14 #1s on Hype Machine. Their debut single, “Bad” entered the Spotify global viral chart at #15 while their single “You” has over 2 million video views and over 8 million streams on Spotify.   They have created official remixes for the likes of Rihanna, Imagine Dragons, Echosmith, Krewella, Vance Joy, Life of Dillon, Halsey, Tori Kelly and more.  They have toured all over the country playing various clubs, colleges and festivals including Billboard’s Hot 100 Music Festival, Electric Daisy Carnival New York, Hangout Music Festival and more.

Eighteen-year-old singer, songwriter and actress Sabrina Carpenter’s journey into music, television and film began at the age of two. She released her debut album Eyes Wide Open at the age of 15, which reflected her life over the previous three years. Shortly after she release her sophomore album EVOLution last October and has since been certified Gold.  The album launched her first ever sold out headline EVOLution Tour, traveling across 35+ cities in the United States, and joined The Vamps as a special guest on their UK arena tour this May as well as Ariana Grande’s Dangerous Woman tour in Brazil this June before heading out on The De-Tour, her 30+ date summer headline trek. Prior to heading out on tour, Carpenter co-wrote and released her newest song “Why,” which Billboard hails as “extremely likable and highly promising of what’s to come.”

To Listen or Purchase: