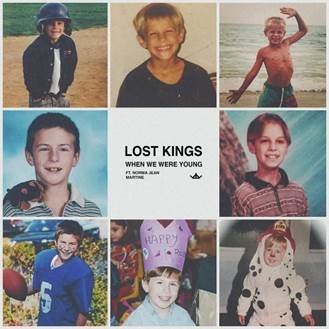 (New York, New York – June 8, 2018) – DJ duo Lost Kings release their music video for their current single, “When We Were Young” featuring Norma Jean Martine (Click Here To Watch).  The video, directed by Kyle Cogan gives fans a sneak peek into Rob and Nick’s childhood and features home videos as well as actors recreating memories from their past.

“We really wanted to capture the nostalgic feeling of the song in the video by recreating some of our favorite memories of our childhood,” says the duo.  “There is nothing better than being carefree, playing sports, getting lost in the woods and being a typical boy growing up. Plus who doesn’t remember their first crush.”

Lost Kings consists of Los Angeles based DJ duo Rob and Nick. They have risen up through the ranks of new producer talents gaining over 157 million total streams worldwide and have had 14 #1s on Hype Machine and securing a Las Vegas residency at The Wynn.

2017 was a big year for Lost Kings as they were named Google Play’s #1 artist to watch and released some of their biggest hits to date.  Most recently, the guys have released their hit single “First Love” ft. Sabrina Carpenter, which currently has over 25 million streams on Spotify and their follow up track “Don’t Call” which has nearly 10 million streams on Spotify.  In addition, they released “Look At Us Now” ft. Ally Brooke and A$AP Ferg, “Quit You” ft. Tinashe and “Phone Down” ft. Emily Warren.  All the tracks have reached nearly 125 million streams combined on Spotify.

To Purchase or Stream “When We Were Young” feat. Norma Jean Martine:
Multi Retailer – http://smarturl.it/LostKingsWWWY