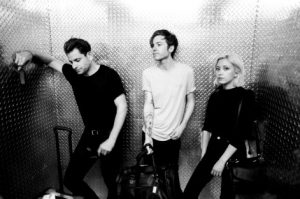 Los Angeles’s Lo Moon have today premiered a brilliant video for current single “This Is It” via NPR Music’s All Songs TV.  Click HERE to watch it.

Acclaimed radio programmer Bruce Warren from WXPN, said about the video:  “They are a band that seemed to come out of nowhere, yet since January of this year, Lo Moon have been steadily peeling back the layers of their mysterious musical adventure. What’s been revealed to date is a neo-classic sound with cascading keyboard textures, rhythmic crescendos, shimmering guitars and cinematic lift.  Lo Moon do intimacy extremely well, and it is well represented in the video for ‘This Is It.’  Shot in black and white, it features the band close up and personal. It captures the energy and interplay of the foursome during their live shows, as if you were on stage right in the center of the action.

Lo Moon were recently announced as one of three very special artists to pioneer the new Slingshot program by NPR Music and VuHaus. Slingshot is a new collective effort among tastemaking public radio music stations to discover and elevate the most promising up-and-coming artists.  Program directors from VuHaus’ public radio music station network selected Lo Moon – as well as Big Thief and Jamila Woods – as the inaugural class of Slingshot artists participating in signature studio sessions and live events across the country.

Lo Moon will also be returning to the road through the end of the year, with headline shows at Rough Trade in Brooklyn and the Troubadour in Los Angeles, as well as opening for the likes of Phoenix and London Grammar.  All tour dates are below.

Lo Moon are a Los Angeles-based band – comprised of Matt Lowell (vocals/guitar), Crisanta Baker (bass/keyboards), and Sam Stewart (guitar) – whose sound meets at the intersection of artists like the xx and Talk Talk among others.  With only two songs out in the world – 2016’s “Loveless” and 2017’s “This Is It” – the band is already becoming one of the most talked-about new artists to emerge from Los Angeles’s burgeoning indie scene.  The trio have received early accolades from The New York Times, NPR Music, V Magazine, KCRW, the Los Angeles Times, and more.  Having opened for the likes of Phoenix, Glass Animals, The Lemon Twigs, Air, London Grammar, and others, Lo Moon are currently putting the finishing touches to their debut album with producers Chris Walla (Death Cab For Cutie) and Francois Tetaz (Gotye).