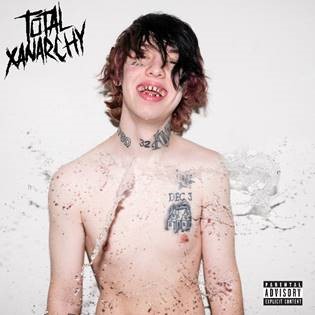 “…just one member of a cohort of young musicians who, by embracing a morose sound, have transformed from underground curiosities into stars in the past year.” –  The New Yorker

“Lil Xan is now one of — if not the hottest — new rapper of this year so far.” – Hypebeast

TOTAL XANARCHY, the anticipated debut album from rapper Lil Xan, is out now both digitally and physically via Columbia Records. The 16-track collection features breakout hit, “Betrayed,” now certified PLATINUM in Canada, as well as previously released songs such as “Wake Up,” “Slingshot” and “Far.” Lil Xan recently released the Sam King directed music video for his track, “The Man,” which can be seen here.

To celebrate the release of his album, Lil Xan will be appearing in multiple cities for an in-store meet and greet with his verifiable army of fans known as the Xanarchy Gang. Lil Xan kicked off his first appearance in his hometown of Riverside, CA at Mad Platter Record Store on Thursday, April 5. For more information about these events, please visit xanarchygang.com/fanarchy.

Acknowledged as one of the up-and-coming artists to watch in 2018, HypeBeast named Lil Xan one of ten rappers you need to know while Ticketmaster declared him an Act to Watch, noting that Lil Xan will be one to “dominate the live scene in 2018.”   Lil Xan has also clocked in as #1 on Pandora’s Trendsetters chart on more than one occasion and recently completed a sold-out 25 city tour across North America including shows in New York City as part of Noisey Weekend and his hometown of Los Angeles.