LIL TJAY IS CURRENTLY ON HIS ‘NO ESCAPE’ HEADLINE TOUR

WHICH INCLUDES 2 SOLD OUT SHOWS AT ELECTRIC BALLROOM 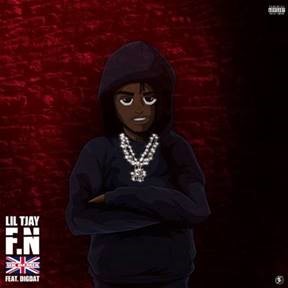 ‘The Prince of New York’ Lil Tjay is taking his success across the pond as he drops his UK centric remix for smash hit F.N. Teaming up with rising rapper DigDat who adds his unique flare to the track, both artists reflect on their shared experiences of difficult beginnings and come ups.

The remix comes off the back of Lil Tjay’s debut album ‘True 2 Myself’ which debuted in the Top 5 in the U.S. Billboard Album Charts week one & almost broke the UK Top 20 charting at #22 in the official album charts. ‘True 2 Myself’ debuted at #2 on Canadian Billboard Album Charts week one. The album features US Gold certified singles ‘F.N’ & ‘Ruthless’ and US Platinum certified single ‘Brothers’ (F.N, Brothers, Leaked & Ruthless are Gold in Canada).

The original version of the single ‘F.N,’ has been a staple on the Canadian Billboard Hot 100 chart since release and has charted Top 50 on Spotify and #1 on SoundCloud. The music video for ‘F.N’ trended Top 3 on YouTube reaching 1 million views in 24 hours and the single has reached +130M audio streams & 70M video streams WW to date. The track has also had great UK radio support from the likes of Radio 1, 1Xtra & Capital Xtra.

Now the track is revitalised with a new remix with DigDat adding a fresh feature on the track. Complete with tales from the jailhouse and the roads, immersive imagery and witty wordplay, DigDat reeks of authenticity and is unafraid to speak his mind on a verse. DigDat previously featured on ‘Back 2 Back’ from Headie One‘s ‘The One Two’, arguably the biggest drill project to come out this year. Add to that the remix of his song ‘Air Force’, featuring UK rap heavyweights Krept & Konan and K Trap and you have an artist holding his own with some of the biggest names in the scene.

Lil Tjay is currently celebrating the release of this album with a 2-month No Escape tour from October 12 at Citi Field for Rolling Loud New York. The tour includes two SOLD OUT dates in London’s Electric Ballroom, with the extra date added due to phenomenal demand. Full list of dates and tickets available at https://www.liltjaymusic.com.