LIL TJAY RELEASES “GIVE YOU WHAT YOU WANT”

I’M BACK TOUR KICKS OFF IN DECEMBER 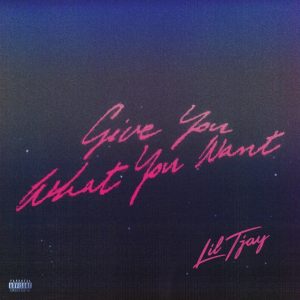 Today, Lil Tjay releases his new song “Give You What You Want” via Columbia Records. The fresh new track from Tjay finds one of the greatest young rappers of music today returning to what he does best – listen HERE.

“Give You What You Want” follows the triumphant return of Lil Tjay with the release of “Beat the Odds.” The track, which has accumulated over 86 million worldwide streams to date, holds true life meaning as the 21-year-old platinum rapper’s quick rise to fame came to a sudden halt this June as he survived a near-death experience. Lil Tjay was treated for gunshot wounds after being shot 7 times including in the lung, and several times in the neck and chest.

Lil Tjay recently announced his “I’m Back” tour. The 5-date run kicks off on December 11 in Los Angeles at The Novo and includes stops in Boston, Toronto and Montreal before concluding in New Jersey at Wellmont Theater on December 29. See full routing below and visit https://www.liltjaymusic.com/ for more information. 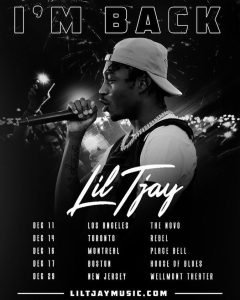 Lil Tjay has captivated the rap scene at a young age with his signature swag and blaring bars that have garnered him an audience of millions. His meteoric rise over the past two years saw the 21-year-old Bronx rapper overcome his struggles and top the charts with a string of hit releases. Lil Tjay’s platinum-certified debut album True 2 Myself features his 4X platinum-certified hit “F.N.,” double platinum-certified “Brothers” and “Leaked,” platinum-certified “Hold On,” “One Take” and “Ruthless” as well as the Gold-certified “Laneswitch” and “GOAT.” Tjay first saw international chart success with the release of the Pop Smoke collaboration “Mood Swings” and on Polo G’s 7x Platinum-certified breakout hit “Pop Out.” His platinum-certified hit collab release “Calling My Phone” featuring 6LACK debuted at #3 on the Billboard Hot 100 and became Lil Tjay’s highest chart debut and career chart peak. “Calling My Phone” received over 60 million streams globally in the first week and has gone on to explode worldwide to instant chart success hitting #1 in Canada, #2 in the UK, NZ, Ireland, #3 in Australia and Norway and more around the world. Lil Tjay has accumulated over 6 billion global streams across all releases and was featured as one of XXL’s Freshman Class 2020 and Billboard’s 21 Under 21. With the release of his 2021 album Destined 2 Win, the young rapper debuted at #5 on the Billboard 200 chart with the now RIAA-certified GOLD LP. Destined To Win features hit collaborations with hip-hop up and comers including platinum-certified “Run It Up” (feat. Offset & Moneybagg Yo) and “Headshot” (feat. Polo G & Fivio Foreign).

In 2022, Lil Tjay kicked off the year as a featured artist on “Vroom,” a track from the brand-new GRAN TURISMO 7 soundtrack, alongside The FaNaTiX, Idris Elba, and more. He released  “In My Head” alongside an accompanying music video on April 1 followed by the release of “Beat The Odds.”