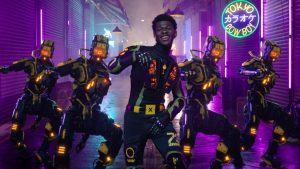 Record-breaking artist Lil Nas X has revealed the official music video for his new single “Panini” today. Set in a futuristic world of flying cars and hologram billboards, the video follows guest-star and Disney actress Skai Jackson in her attempt to escape Lil Nas X as he pops up everywhere she goes, trying to win her over as a fan. The treatment for the visual came directly from Lil Nas X himself and was brought to life and directed by film director, special effects artist, musician and YouTuber Mike Diva.

Lil Nas X has voiced that “Panini” is a song about a fan who loves you in the early stages of your career for the cool factor of knowing about something before it becomes mainstream, and that fan feeling like they’ve outgrown you when the rest of the world catches on.

“Panini” has already been streamed a whopping 290 Million times worldwide.