WITH NEW SINGLE AND VIDEO FOR 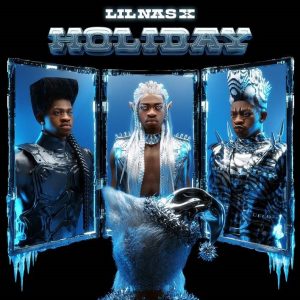 Following the epic trailer that took the internet by storm on Monday, Grammy Award-winning artist Lil Nas X has made his highly awaited return with his new single “HOLIDAY”. The song was co-produced by Take A Daytrip and Tay Keith, and marks Lil Nas X’s first offering from his forthcoming debut album. Nas has also premiered the song’s cinematic and over-the-top official music video today, which he co-directed with acclaimed director and creative Gibson Hazard. Set on Christmas Eve of the year 2220, the video follows Nas through his futuristic North Pole workshop where he takes on the role of four different characters. Buckle up and watch Lil Nas X ride across the US in his high-tech sleigh with robo-reindeer in tow.

Lil Nas X has partnered with global online platform Roblox to deliver the debut performance of “HOLIDAY”, along with more of his biggest hits, in the groundbreaking first-ever virtual concert on the platform. This innovative and fully immersive concert experience will feature all-new technology on Roblox and will be shown three times for different time zones, beginning Saturday, November 14 at 1pm PT. Visit the event page on Roblox.com for more details.

About Lil Nas X
Lil Nas X is a Grammy award-winning rapper, singer and songwriter from Atlanta, Georgia. He rose to fame in 2019 when his genre-shattering hit song “Old Town Road” featuring Billy Ray Cyrus went viral and became the longest running #1 single in Billboard Hot 100 history. Dubbed “an internationally recognized phenomenon” by Billboard, Lil Nas X and the Diamond-certified song have been recognized with various major awards from several areas of the music industry, including two Grammys. He has been featured on the cover of TIME magazine (among many others), was named one of TIME’s 25 most influential people on the Internet, one of Billboard’s 21 Under 21, and was also included on Forbes’ 2020 30 under 30 list. After releasing his highly-successful EP 7 in 2019, which features 5x Platinum U.S./4x Platinum Canada single “Panini” and Platinum song “Rodeo,” Lil Nas X is currently at work on his debut album.