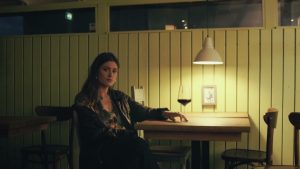 (August 9, 2017) – Singer/songwriter LÉON has released the official music video for her enchanting song “Surround Me” today. The video, directed by Helgi and Hörður, was filmed in Iceland and captures the singer’s care-free attitude. LÉON filmed the entire video in forward motion while simultaneously singing the lyrics in reverse for the second half of the song.  The rousing new track was released on July 7 and is available at the above retailers.

LÉON also recently announced her second North American headline tour, which began last weekend at Lollapalooza and wraps up in Washington D.C. at the end of October. The tour will consist of stops in Toronto, Vancouver, New York, Los Angeles, Boston and other major markets with additional festival appearances at Bumbershoot and Meadows Music and Arts festival. For tickets and additional information please visit http://smarturl.it/LEONonTour.

Lotta Lindgren aka LÉON first became known for her debut single “Tired of Talking,” which is featured on her debut EP Treasure. The song received critical praise from GLAMOUR, InStyle, Noisey, PAPER, NYLON and more. LÉON released her 4-song sophomore EP For You in March of this year featuring title track “For You,” along with other masterpieces “Sleep Deprived,” “Liar” and “Think About You.”