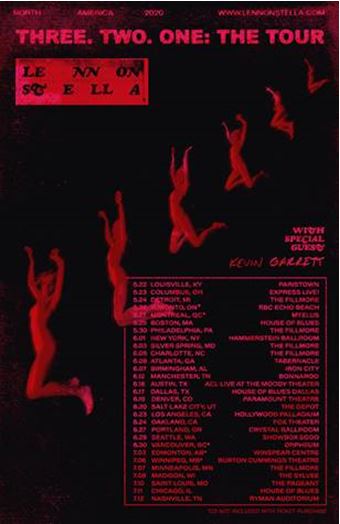 In conjunction with her new single, Lennon also announces her North American headlining tour, as well as the title of her debut album, Three. Two. One. The tour will hit 28 cities across North America and see the singer play venues such as RBC Echo Beach in Toronto, Canada on May 26th, Hammerstein Ballroom in New York, NY on June 1st, Hollywood Palladium in Los Angeles, CA on June 23rd, and Ryman Auditorium in Nashville, TN on July 12th.  In addition, she will also play at Bonnaroo Music & Arts Festival this summer. Please see full routing below and click HERE for more info.

VIP meet & greet packages will be available in all markets for purchase during this entire period.

Lennon’s new single “Golf on TV” featuring JP Saxe is the follow up to her most recent track “Kissing Other People.” Click HERE to view the music video!

Lennon Stella first rose to popularity when she was just 12 years old as part of the duo Lennon & Maisy, alongside her younger sister. The pair gained national attention with a cover of Robyn’s “Call Your Girlfriend”. Lennon went on to star in the ABC/CMT smash Nashville as Maddie Conrad for six years. Kickstarting her solo recording career, Lennon debuted with her 2018 Love, me EP which bowed in the Top 5 of the Billboard “Heatseekers Albums” chart, that included the Music Canada certified Platinum single “La Di Da,” amassing more than 96 million Spotify streams and counting. Lennon is named among Refinery29’s “Young Celebrities to Watch in 2019”, Teen Vogue’s “16 Musicians You Need to Be Listening to in 2019” and most recently Amazon Music’s Artist to Watch for 2020.

Toronto-born, Los Angeles-based singer-songwriter, JP Saxe always finds a way to cut beyond the surface, tapping into a deep connectivity with universal emotion and human experience. This was proven on his beloved 2018 single, “The Few Things” which led to his first headlining tour and a label deal with Arista Records/Sony Music Entertainment. In the fall of 2019, JP released an emotionally-rich duet with Grammy-nominated artist, Julia Michaels titled “If The World Was Ending,” which is now certified Gold in Canada. Both JP and Julia performed the track on NBC’s The Tonight Show Starring Jimmy Fallon in November 2019. The song currently has over 225,000,000 streams, and has landed on Spotify’s sought after playlist, ‘Today’s Top Hits’ as well as Apple Music’s ‘A-List Pop’ playlist at the #1 position. The FADER referred to JP as a “trap crooner” following his single “Women Who Look Like You”, featuring rapper Guapdad 4000. At the start of 2020, JP released his anticipated debut EP, Hold It Together. TIME Magazine praised it for “exploring the weird – sometimes lovely – sometimes painful – emotions that bubble up in relationships” and included “3 Minutes” off the EP in their ‘5 Best Songs of the Week’ roundup.

Kevin Garrett twists up soulful tradition with singer-songwriter spirit, lush instrumentation, and alternative adventurousness. The Pittsburgh-born GRAMMY® Award-nominated artist, multi-instrumentalist, and producer echoes the kind of grit meant to be smoothed out only on vinyl and emanates the ambition of a 21st century festival draw. In 2015, Kevin hit the road with Irish sensation James Vincent McMorrow and unveiled his debut EP, Mellow Drama, which attracted acclaim from The Fader, Complex, Vibe, and Pancakes & Whiskey. It also yielded a hit with the singles “Coloring” racking up 30 million-plus streams. Beyond gigs alongside everyone from X  Ambassadors to Alessia Cara and electrifying festival performances at Bonnaroo, Latitude & Longitude, and Sasquatch, he contributed “Pray You Catch Me” to Beyoncé’s blockbuster Lemonade, sharing co-writing and co-production with the superstar and James Blake. 2017 saw him sell out his first headline tour before spending 2018 recording the new album with producer Brad Cook [War On Drugs, Bon Iver] in Durham, NC. Kevin’s brand of bold and blunt soul fully unfolded on his 2019 full-length debut, HOAX [AWAL]. Kevin is set to release his newest body of work, his Made Up Lost Time EP, on February 21st.