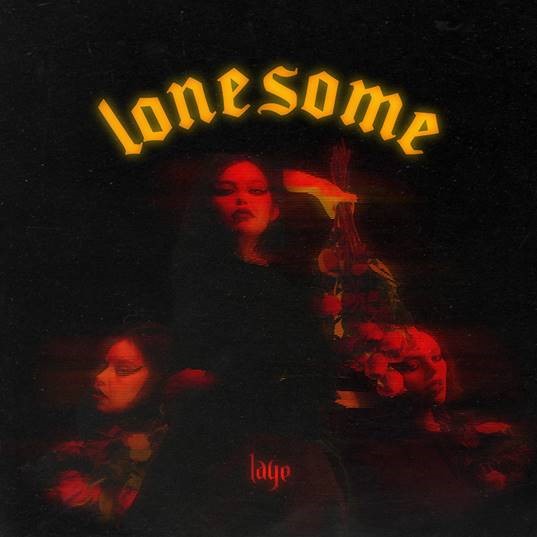 laye reflects on the track: “dancing” is a song about insecurities within yourself and extendedly, within a relationship. It’s about the worries that go on in your mind. If they go unsaid, they eat at you, but at the same time, if you speak of them, they eat away at your relationship.  It’s almost more about self-doubt than anything. Unintentionally pushing someone away because of your personal fear of not being enough for them, but more so the fear of them wanting something greater.”

Armed with a crew of sonic heavyweights, laye has curated a collection of sounds for lonesome that boldly represents her ambition, namely to change the pop game.

Tracks like, “milk n honey” and “no love lost” (currently blowing up Spotify and iTunes charts and playlists), are perfect examples of how a song can sound so intimate that you feel like you are eavesdropping on a closed-door conversation. The way laye sings brutally honest statements makes listeners think they are glancing at unsent text messages nobody is supposed to see. Whether she’s navigating the complexities of love and lust in the digital age (“goldfinger”, “better” and “boy” feat. BIA) or how she analyzes her own feelings in the brilliant and beautiful anti-ballad, “lonely anthem”, laye’s songs sound like classified information.

One of lonesome’s jewel-in-the-crown tracks, “sicker” brings together some of laye’s signature soundscapes. From skeletal yet immersive drum patterns to bass-heavy 90s trip-hop and light touches of trap, the multi-textured song vacillates between being a song of self-reflection and a party jam. Layered upon the rich synth is laye’s ethereal, super-smooth vocals which go from commanding to vulnerable within seconds.

“I think people are really redefining what it means to be a pop artist today and I’ve felt that way for a while. When you hear ‘pop’ I think your mind goes to one specific type of song, but ‘pop’ is almost always a mix of genres, and it’s up to you to choose what you want to do with it and which direction you want to go with,” she says. “It isn’t about using the same tricks or hooks, it can be dreamy, atmospheric, and catchy at the same time, it can be anything really.”

It’s exactly this depth and range that secured laye a prime slot at Osheaga this year, a gig that is set to be a career-defining performance for the artist. Having already cut her teeth as the opening act for a number of shows, including ambient rock band, Cigarettes After Sex, laye’s own hypnotic presence on stage reflects her music—she prefers to captivate a crowd with composure and a sense of secrecy.