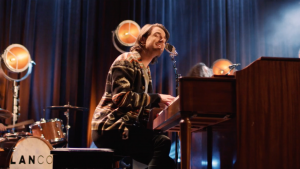 NASHVILLE, TN – Feb. 25, 2021 – Multi-Platinum group LANCO brings to life the clever lyrics behind their new roots-rock anthem “Near Mrs.” with the release of its official music video today via YouTube. The “exceedingly clever” (Music Row) track’s video shares personal footage of their wives, which is intertwined with a hard-charging live performance from the band. Directed by Devon Lancaster, the official music video for “Near Mrs.” will be immediately available today following their YouTube Live Q&A at 5:30 PM CT. Tune in  HERE.

“When we got together to write ’Near Mrs.’ we focused on how things happen in life to lead you to where you are today,” lead singer Brandon Lancaster said. “Personally, there are a lot of double meanings throughout this song, and the music video gives a glimpse into that. We get to look back at some of the first moments with our wives….to weddings and babies…and it’s going to be pretty special to have for years to come.”

Written by Lancaster, Shane McAnally and Jeremy Spillman, the gentle slow-burning sway and full-circle theme is “a welcome return” (Billboard) for LANCO by critics and fans alike. Listen to “Near Mrs.” HERE.

“The band returns to the rootsy sound with a piano jam that celebrates the close calls that bring us into contact with the ones who, thankfully, didn’t get away.” – Rolling Stone

“Serves as the first look into the evolution of LANCO’s songwriting…the distinctive sound that fans fell in love with, via hits such as ‘Greatest Love Story’ and ‘Born to Love You’ remains perfectly intact” – American Songwriter

“It looks back at the steps it takes to find ‘the one’ and being as grateful for the journey as the destination.” – PEOPLE

Steeped in the sepia-toned euphoria of small-town life, LANCO broke out with the 2x Platinum hit “Greatest Love Story,” earning a multi-week No. One with a heartland rocker for a new generation. They followed up with the Billboard Country Albums chart topper HALLELUJAH NIGHTS, marking the first Country group to earn a No. One debut in a decade. Additionally LANCO garnered another Platinum hit, sending the neon romance of “Born to Love You” into Country radio’s Top 20 while sending LANCO on tour around the world. New music from the ACM  “New Group of the Year” follows multiple nominations from the CMT, CMA, ACM, AMA and iHeartAwards, while Lancaster became the first member of a group to win NSAI ’s 2019 “Songwriter/Artist of the Year.” All along Lancaster, Eric Steedly, Chandler Baldwin, Jared Hampton and Tripp Howell electrify live audiences, using skilled musical chops, an adventurous spirit and expert showmanship to hard-wire connections with fans wherever they perform. For more information on LANCO visit www.lancomusic.com.