National Television Appearances Roll Through To Next Week With Performances on The Bachelor, TODAY and Jimmy Kimmel Live!

“If You Haven’t Heard About Country Group LANCO, That Will Change Soon,” – St. Louis Dispatch 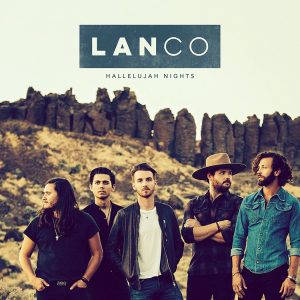 NASHVILLE, TN – Jan. 19, 2018. – “LANCO is on a roll not even a month into the new year” (Taste of Country) as the GOLD selling breakthrough band unleashes their debut album HALLELUJAH NIGHTS (Arista Nashville) today, January 19th. As the hype continues, LANCO will perform their multi-week GOLD  No. One hit “Greatest Love Story” on The Bachelor (1/22 at 7:00P CT on ABC) on Monday, before taking their anthemic single “Born To Love You” to TODAY (1/25 at 7:00A ET/CT on NBC) and Jimmy Kimmel Live!  on Thursday (1/25 at 10:35P CT/11:35 EST on ABC). Additionally, fans can join the band for two intimate record signings, as they kick things off at Nashville’s legendary Ernest Tubb Record Store this Sunday (1/21 1:00pm CT) and the new Opry City Stage in New York City (1/24 at 2:00pm ET.) Listen to HALLELUJAH NIGHTS now at all digital and streaming outlet here.

In case you missed it, LANCO made their debut on The Ellen Degeneres Show this week and the renowned host claims, “you have to watch this”: http://bit.ly/2DktQrw

Heralded as “one of the most-anticipated albums of 2018” (Rolling Stone), HALLELUJAH NIGHTS features 11 tracks co-written by the band’s lead singer and namesake, Brandon Lancaster. To capture the electric energy of their live performance, producer Jay Joyce maintained LANCO’s signature organic sound which continues to be applauded by critics and fans alike.

“11-song collection that puts an anthemic spin on young love and small-town life..many of the songs are interwoven with repeating themes and characters.” – The Tennessean

“The human connection and deliberation truly makes Hallelujah Nights stand out among its modern peers. There’s an actual song cycle, with the end of one track bleeding into the next. It’s possible to discern that each story is happening in the same town to the same characters.” – Rolling Stone

“Blends fresh sonic sounds to make an ear-pleasing blend of instrumentals backing up the lyrics of frontman Brandon Lancaster. Roots Rock, Country/Pop and Alternative/Folk are all blended into an interesting stew on LANCO’s debut album.” – Roughstock

“Sense of nostalgia….underlines the album’s theme of living in the present, but celebrating and cherishing the past.” – ABC News Radio

Rooted in the southern storytelling of Country music with the modern punch of rock & roll, HALLELUJAH NIGHTS (Arista Nashville) is LANCO’s coming-of-age debut album. Equal parts nostalgic and forward-thinking, the record breathes new life into universal themes with their two-week No. ONE GOLD hit “Greatest Love Story” and its follow-up anthemic current single “Born To Love You.” They are now the only Country band to achieve a PLATINUM single prior to a debut album release in America. LANCO’s story begins in the small towns where all five bandmates — Lancaster, bassist Chandler Baldwin, multi-instrumentalist Jared Hampton, drummer Tripp Howell and lead guitarist Eric Steedly — were raised. After they crossed paths in Nashville during their early 20s, LANCO bonded over that shared southern adolescence, while hoping to build a new life in a bigger city. “Few bands have have generated as much buzz as LANCO” (Pop Culture) as their self-titled debut EP, has gained more than 100 million streams. Named “the band to watch” by Bobby Bones, CMT, Entertainment Weekly, Hits Magazine, Pandora, Rolling Stone, Pandora, Spotify, SIRUIS XM and more, LANCO gained their status from touring the country’s top festivals with their “twangy rock, blistering guitars and chugging rhythms” (Nashville Scene) at Bonnaroo, Lollapalooza, Austin City Limits, Watershed, Faster Horses and more. For more information on LANCO and upcoming tour dates, visit www.LANCOMusic.com