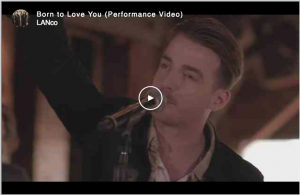 NASHVILLE, TN – Dec. 01, 2017 – Sony Music Nashville’s breakout band LANCO continues to unravel the storyline rooted throughout their debut album HALLELUJAH NIGHTS, available January 19th, with a new performance video today of the record’s “Born to Love You” exclusively on American Songwriter . “Born to Love You” was written by Ross Copperman, Ashley Gorley, Josh Osborne and lead singer Brandon Lancaster, who solely penned their current two-week No. One GOLD single “Greatest Love Story,” and had a hand in writing every song on the highly anticipated album. As LANCO continues to build off recent milestones, they launch their new fan club “The Company” on their official website www.LANCOMusic.com. HALLELUJAH NIGHTS is now available for pre-order & digital pre-save on LANCOMusic.com and at all retailers: http://smarturl.it/hallenights. With the digital pre-order, fans receive instant downloads of five songs from the upcoming album including the brand new track “Born to Love You” and four additional songs off LANCO’s debut EP  — “Greatest Love Story”, “We Do”, “Long Live Tonight” and “Troublemaker.”

“Sonically, ‘Born To Love You’ is one of my favorite songs on the record because it’s really the bridge between the two different aspects of HALLELUJAH NIGHTS. It starts out a bit laid back and builds into this real rocking and up-tempo song that reflects the lyrics,” Lancaster told American Songwriter. “In an anthemic way, it’s an ode to the path hometowns set out for you and the different experiences we go through that lead to finding someone who is literally your reason for being here.”

Fans can exclusively watch the LANCO’s performance video of the “infectious” song “Born to Love You” at American Songwriter here: http://bit.ly/2kiMDPu

The band’s “distinct brand of country music” (Sounds Like Nashville) has resonated with fans throughout the life of their self-titled debut EP, already counting more than 100 million streams. “Shaking up the Country charts” with Lancaster’s “confessional style lyrics” (Entertainment Weekly), LANCO has been named “the band to watch” by Bobby Bones, CMT, Entertainment Weekly, Hits Magazine, Pandora, Rolling Stone, Pandora, Spotify and more, gaining their status from touring the country’s top festivals with their “twangy rock, blistering guitars and chugging rhythms” (Nashville Scene) at Bonnaroo, Lollapalooza, Austin City Limits, Watershed, Faster Horses and more. LANCO is currently on the road supporting Dustin Lynch’s THE RIDE OR DIE TOUR and will head out in January for Chris Young’s LOSING SLEEP WORLD TOUR. For more information and upcoming tour dates, visit www.LANCOMusic.com.