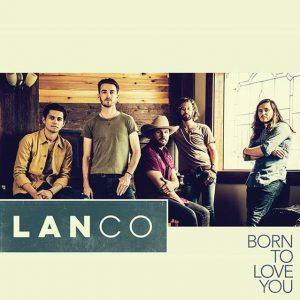 NASHVILLE, TN – Jan. 08, 2018 – Building on the momentum started with the GOLD No. One Country Song, “Greatest Love Story,” Sony Music Nashville’s buzz band LANCO will release their new single “Born To Love You” to Country radio on January 15th, in Canada. Produced by Jay Joyce and written by lead singer Brandon Lancaster, Ross Copperman, Ashley Gorley and Josh Osborne, the unconventional track is the next taste of new music off their debut release, HALLELUJAH NIGHTS available January 19th. “Born To Love You” continues the through line found across the record, as the “infectious love song” (American Songwriter) opens the sequence and immediately “puts the focus on anthems, the band’s specialty” (Rolling Stone). HALLELUJAH NIGHTS is now available for pre-order and digital pre-save at all retailers . With the digital pre-order, fans receive instant downloads of five songs from the upcoming album including “Born to Love You.”

“‘Born To Love You’ tells another piece of LANCO’s story…who we all are, the small towns we came from and the search for what the world has to offer,” said lead singer Brandon Lancaster. “This song brings together those early experiences with finding that person who makes it all matter…the person that you were born to love. We spent a couple of weeks writing this one, and in the studio, we got to explore a lot of different sounds on it.”

“Born To Love You” “provides a bridge from the laid-back vibe of that first hit to the more energetic moments in LANCO’s musical repertoire and live show,” (Rare). As the five-man band kick off their first run of 2018 this Thursday (1/11) in Indianapolis, IN, on Chris Young’s LOSING SLEEP WORLD TOUR, they will bring that same “live show energy that is going to build their fan base in a hurry,” (Tucson Weekly). As a co-writer of all eleven songs on HALLELUJAH NIGHTS, Lancaster’s Nashville hometown roots and authentic style has resonated with fans through the warm introductory of “Greatest Love Story,” as the “gifted storyteller” (Taste of Country) solely penned the two-week PLATINUM No. One. The recent accolade marked LANCO as the only Country Band in history to earn a PLATINUM single prior to a debut album release in the US.