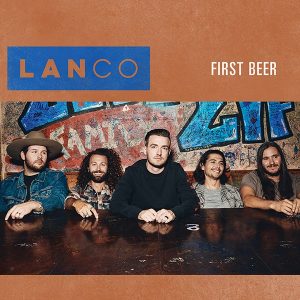 “There are some memories in life where you don’t remember every detail, but one vivid experience that stuck with all of us was our first drink and the people we were with,” Lancaster said. “It’s a universal song that’s going to be fun to get back on the road and play for our fans. They might not remember the beer, but they will take away an experience, which is the entire sentiment of the song.”

“I love that this song turns into a conversation piece after listening, and it gives people the chance to reminisce on their own story,” Howell added. “That’s how this song started to quickly come together….when we are on the road and someone spills a drink the running tag line is ‘I remember my first beer’… and we just went off our own memories and the song started to write itself.”

The new track follows LANCO’s “Near Mrs.” which had its television premiere on CBS’ The Late Show with Stephen Colbert last month. Watch the performance HERE. With the new music, LANCO’s “welcome return” (Billboard) leads with the notion that the past has made us who we are through clever lyrical storytelling. The evolution of LANCO’s songwriting has “the band looking at life from a whole new vantage point” (American Songwriter)  as they continue to create and combine the heart of country, the soul of classic rock, and the rhythmic of modern pop, all in anticipation for the day they return to the stage.

About LANCO:
Steeped in the sepia-toned euphoria of small-town life, LANCO broke out with the 2x-Platinum hit “Greatest Love Story,” earning a multi-week No. 1 with the fan favorite. They followed up with the Billboard Country Albums chart-topper HALLELUJAH NIGHTS , marking the first Country group to earn a No. 1 debut in a decade. Additionally, LANCO garnered another Platinum hit, sending the neon romance of “Born to Love You” into country radio’s Top 20 while sending LANCO on tour around the world. New music from the ACM “New Group of the Year” follows multiple nominations from the CMT, CMA, ACM, AMA and iHeart Awards, while Lancaster became the first member of a group to win NSAI’s 2019 “Songwriter/Artist of the Year.” All along, Lancaster, Eric Steedly, Chandler Baldwin, Jared Hampton, and Tripp Howell electrify live audiences, using skilled musical chops, an adventurous spirit, and expert showmanship to hard-wire connections with fans wherever they perform. For more information on LANCO, visit www.lancomusic.com.