LAMB OF GOD Celebrate the 20th Anniversary of BURN THE PRIEST with Release of New Covers Album, Legion: XX, in Stores next Friday, May 18 via Epic Records 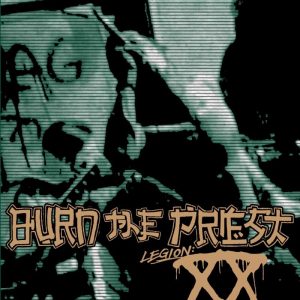 RIAA-certified, Billboard chart-topping, five-time Grammy nominated Richmond, VA band LAMB OF GOD will release their highly-anticipated full-length covers album as BURN THE PRIEST, Legion: XX, next Friday, May 18 via Epic Records in celebration of BURN THE PRIEST‘s upcoming 20th anniversary. Legion: XX is a collection of songs reflecting the greatness of the classic punk, hardcore, crossover and noise artists that influenced them in their formative years, executed with the band’s signature modern sound.

BURN THE PRIEST rocked the music world with the release of their brash, in-your-face Legion: XX covers of the Accused‘s “Inherit The Earth” and Big Black‘s “Kerosene“, and today fans can witness another blazing cover – this time of Bad Brains‘ “I Against I”. Listen now via http://burn-the-priest.com.

“It’s been a super-big honor to recently sing with one of my favorite bands of all time,” says vocalist Randy Blythe. “Playing with the Bad Brains was an unearthly experience – trying to replace the fastest-singing human ever on songs like “Banned in DC and “Pay to Cum.” When it came time to choose our cover of I Against I’, I was trying not to sound like H.R., as he’s so unique, but yet also throwing in enough of his style to show respect to his unique voice, through my interpretation. To cover the Bad Brains can’t be a straight-forward cover, we had to nail it, and we did.”

Pre-order and pick up merch bundles now via http://burn-the-priest.com. Fans can also stream “Inherit The Earth”, “Kerosene”, and “I Against I” here: http://btp.lnk.to/legionxx. On street date, a 7″ vinyl version of “Inherit the Earth” featuring a B-side of “In the Meantime” (originally performed by Helmet), will become available.

Yesterday, LAMB OF GOD hit the road in direct support of Slayer‘s final world tour, which features two North American legs. LAMB OF GOD will perform select one-off festival dates during this run, as well as headline shows featuring support from Behemoth and Napalm Death. Tickets and VIP packages are on sale now at www.lamb-of-god.com. LAMB OF GOD headline dates falling within are marked with a double asterisk in bold.

LAMB OF GOD will also join Slayer on their newly announced European headline tour dates as direct support, featuring additional support from Anthrax and Obituary. See below for all confirmed tour stops.

Keep up with LAMB OF GOD and BURN THE PRIEST‘s Legion: XX via http://burn-the-priest.com and http://lamb-of-god.com