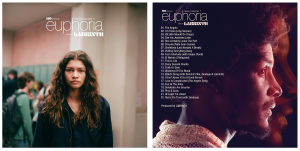 Today, GRAMMY-nominated and Emmy Award-winning multihyphenate Labrinth has released the highly anticipated official score album for season two of the hit HBO original series “Euphoria.” The album is out now and fans can buy and stream it HERE.

Announced in an Instagram post a few weeks ago, Labrinth describes the album as “so much more than a score album…It’s an experience.” The high-octane score consists of 22 tracks meticulously hand-crafted by Labrinth, including all the songs that fans have been requesting including the original version of “I’m Tired,” as well as Zendaya’s vocal version which aired at the end of the season two finale. Other highlights include “See You Assholes Later,” which fans know as the song from the Cassie flower scene, “Dracula (Nate Sees Cassie),” “ICE (We Should Do Drugs)” which fans know as “What’s Up” (Fez’s Song) and “Fun At The Alley” which plays during the scene where Jules, Nate, Kat and Maddy go bowling. Full tracklist below.

In the midst of all the exciting releases, Labrinth has also released the official video for fan-favorite track “Mount Everest” which has been featured numerous times in both seasons of “Euphoria” – watch HERE.