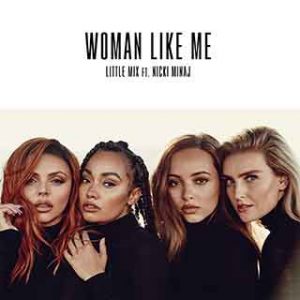 “I always say what I’m feeling, I was born without a zip on my mouth. Sometimes I don’t even mean it, it takes a little while to figure me out. My mama always said girl you’re trouble, and now I wonder could you fall for a woman like me?”

The wait is over.

“Woman Like Me” is a harmony led, urban, reggae pop smash. Nicki Minaj collaborates with the band on the track which is sure to dominate radio playlists across the world throughout the last few months of 2018.

“Woman Like Me” is a coming of age record, the story of Jesy, Jade, Leigh- Anne and Perrie growing as women. The lyrics speak of being honest about who you are as a woman, telling a man they need to accept you, flaws and all.

Listen to the track here: http://smarturl.it/LMWomanLikeMe

Since 2011, Perrie Edwards, Jesy Nelson, Leigh-Anne Pinnock and Jade Thirlwall have not only established themselves as one of British pop’s brightest acts, but as a global pop phenomenon. They have fully cemented their status as the world’s biggest girl band, with the quartet asserting dominance in the charts album after album.

Little Mix have sold more than 45 million records worldwide and notched up a total of four UK No.1 singles, four platinum-selling albums and nine platinum selling singles, surpassing a record previously held by the Spice Girls. Their last album Glory Days is the biggest selling album by a female group this millennium in the UK, alongside being named the longest-reigning Top 40 album for a girl group ever.

Little Mix have established their reputation as one of the most phenomenal performers around. Alongside massive tours of Europe, Australia, Japan and the US, the group’s shows have also been named as the biggest UK arena tours for 2016 and 2017. This summer they toured stadiums across the UK with the ‘Summer Hits’ Tour. They were also named the UK’s Most Watched VEVO Artist of 2017.

The band have spent 2018 writing and recording their upcoming fifth album, due out in November. The collection is their strongest work to date, being as the girls themselves say ‘the album we always wanted to make’.

Pop acts like Little Mix don’t come along that often. Growing better and bolder with each new album, they understand the brilliance of pop music and how it relates to their passionate and loyal fanbase. Now with the release of ‘Woman Like Me’ and their hugely anticipated fifth album just around the corner, things are about to go properly interstellar.