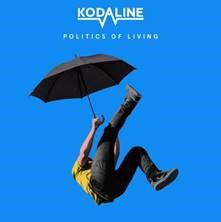 “Head Held High” is a mandolin-driven slice of summer pop with a powerful message guaranteed to put a smile on your face, and is one of the standout tracks on a new album that sees the band stepping in a bold new direction.

Their new sound germinated during sessions with Kygo two years ago on the global hit “Raging”, and was quickly followed by last summer’s radio mainstay “Brother”. Earlier this year saw the release of one of their best ever singles, “Follow Your Fire”, a slice of powerhouse pop, which showed the band are ready to cement their place amongst the UK’s best in 2018.

This will be the first collection of new music since 2015’s Coming Up For Air, which went Gold in the UK. The band’s debut album, In A Perfect World has sold over a million copies worldwide and imprinted itself on the nation’s consciousness with streaming figures well into the 100s of millions. On Vevo the band’s videos have had over 200 million views, and they have sold over a million singles.

With a summer of festival performances including Isle Of Wight and TRNSMT, Kodaline head out on a slew of European and US dates this autumn with plans to play closer to home in early 2019.Kodaline are – singer Steve Garrigan, guitarist Mark Prendergast, bassist Jason Boland and drummer Vinny May.