KINGS OF LEON RELEASE EIGHTH STUDIO ALBUM WHEN YOU SEE YOURSELF 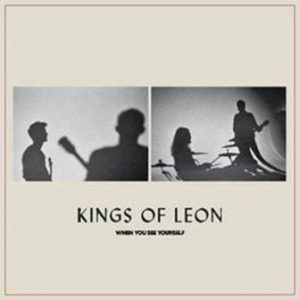 Recorded at Nashville’s famed Blackbird Studios and produced by Grammy Award-winning Markus Dravs, the album has received early critical acclaim.  Rolling Stone Magazine notes “…the band’s eighth album is an arena rock of the mind,” that “lunges and soars with rippling guitar leads cascading across some of the dirtiest riffs the band has put on a record since the New South-meets-neo-Strokes garage moves of its first two albums… this record might surprise you.”

The band made noise earlier this week with the announcement of their groundbreaking “NFT YOURSELF” collection drop. Leading the charge for musicians in the NFT marketplace KOL is shifting power back into the hands of creators with a first ever NFT drop to coincide with an album release. The digital art collection will feature up to 25 unique pieces including two offerings of which ALL proceeds will benefit Live Nation’s Crew Nation Fund. The drop goes on-sale today, March 5th at NOON EST, and includes real-world vinyl and one-of-a-kind experiences. Made in collaboration with longtime creative partner Night After Night, the collection is being made available by YellowHeart, the world’s first socially responsible ticketing platform and the pioneer of a rapidly growing trend of NFTs empowering artists to sell collectibles directly to their fans.

When You See Yourself – Tracklist

About Kings of Leon

Since their debut in 2003, Kings of Leon (Caleb (guitar/vocals), Nathan (drums), Jared (bass) and Matthew Followill (guitar)) have released seven albums (Youth & Young Manhood (2003), Aha Shake Heartbreak (2004), Because of the Times (2007), Only by the Night (2008), Come Around Sundown (2010), Mechanical Bull (2013), WALLS (2016), sold over 20 million albums and nearly 40 million singles worldwide. The multi-platinum selling band has had five singles on the Billboard Hot 100 chart, all seven of their studio albums on Billboard’s Top 200 list and two singles that reached #1 on Modern Rock radio. With the release of WALLS, the band garnered their first-ever number one album debut on the Billboard Top 200. In addition, they have had eight Grammy Nominations, three Grammy Award wins, three NME Awards, two Brit Awards, and one Juno Award. They have toured all over the world, playing at top venues and headlining major festivals such as Bonnaroo, Lollapalooza, Austin City Limits, and Glastonbury. Kings of Leon is set to release their eighth studio album When You See Yourself this March.