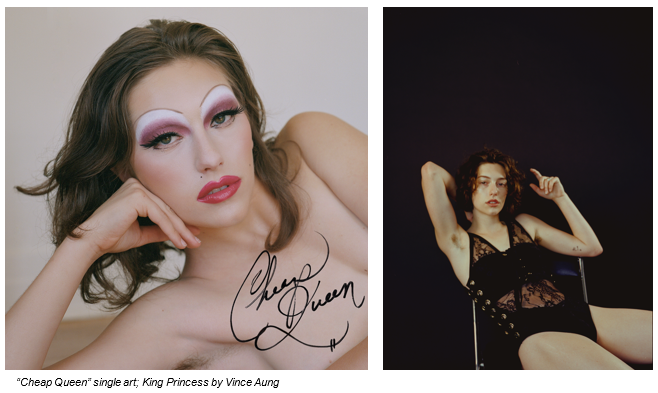 “For King Princess, a 20-year-old who’s currently
blooming into a queer icon, ‘Cheap Queen’ has it all”—NPR

“No one is cooler than King Princess”—Refinery29

“The way King Princess sings sounds deeply intimate,
like she’s delivering her lyrics up close in your ear.”—TIME

“King Princess is carving her own way in the pop genre.”—Paste Magazine

This weekend, King Princess will perform at Bonnaroo in Tennessee. The performance follows a sold-out headline tour across North America and debuts at Coachella and Governors Ball, with further festival and headline shows planned around the world including Glastonbury, Leeds Festival and more.

“Cheap Queen” follows a breakout 2018 for King Princess. Her debut single, an ode to untold queer histories titled “1950,” became an overnight smash hit with over 200 million streams to date, while her debut EP, Make My Bed, was released to widespread critical acclaim. Since the release, King Princess has gone to collaborate with Fiona Apple for the reimagining of “I Know” earlier this year and share the critically acclaimed “Pussy Is God” which has streamed over 17 million times to date.

Born and raised in Brooklyn, NY, King Princess is a vocalist, multi-instrumentalist and songwriter. The product of a musical family, she spent much of her childhood tinkering on the vintage Neve board in her father’s Brooklyn studio, learning guitar and piano along the way. King Princess’ debut album is set to for release this year.